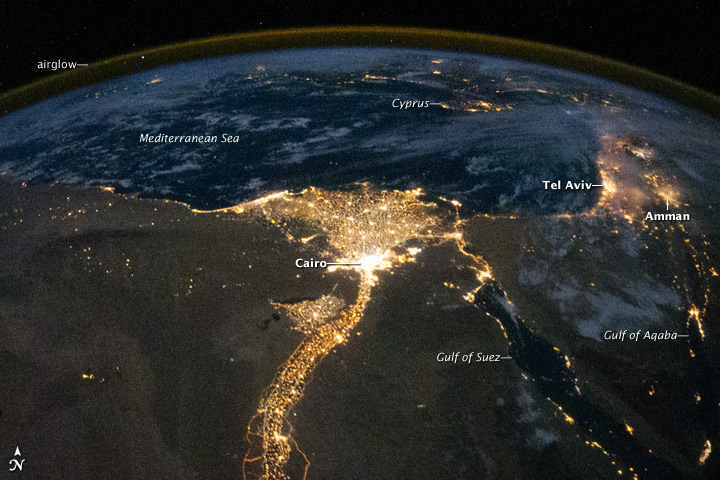 One of the fascinating aspects of viewing Earth at night is how well the lights show the distribution of people. In this view of Egypt, we see a population almost completely concentrated along the Nile Valley, just a small percentage of the country’s land area.

The Nile River and its delta look like a brilliant, long-stemmed flower in this astronaut photograph of the southeastern Mediterranean Sea, as seen from the International Space Station. The Cairo metropolitan area forms a particularly bright base of the flower. The smaller cities and towns within the Nile Delta tend to be hard to see amidst the dense agricultural vegetation during the day. However, these settled areas and the connecting roads between them become clearly visible at night. Likewise, urbanized regions and infrastructure along the Nile River becomes apparent (see also The Great Bend of Nile, Day & Night.)

Another brightly lit region is visible along the eastern coastline of the Mediterranean—the Tel-Aviv metropolitan area in Israel (image right). To the east of Tel-Aviv lies Amman, Jordan. The two major water bodies that define the western and eastern coastlines of the Sinai Peninsula—the Gulf of Suez and the Gulf of Aqaba—are outlined by lights along their coastlines (image lower right). The city lights of Paphos, Limassol, Larnaca, and Nicosia are visible on the island of Cyprus (image top).

Scattered blue-grey clouds cover the Mediterranean Sea and the Sinai, while much of northeastern Africa is cloud-free. A thin yellow-brown band tracing the Earth’s curvature at image top is airglow, a faint band of light emission that results from the interaction of atmospheric atoms and molecules with solar radiation at approximately 100 kilometers (60 miles) altitude.

Astronaut photograph ISS025-E-9858 was acquired on October 28, 2010, with a Nikon D3S digital camera using a 16 mm lens, and is provided by the ISS Crew Earth Observations experiment and Image Science & Analysis Laboratory, Johnson Space Center. The image was taken by the Expedition 25 crew. The image in this article has been cropped and enhanced to improve contrast. Lens artifacts have been removed. The International Space Station Program supports the laboratory as part of the ISS National Lab to help astronauts take pictures of Earth that will be of the greatest value to scientists and the public, and to make those images freely available on the Internet. Additional images taken by astronauts and cosmonauts can be viewed at the NASA/JSC Gateway to Astronaut Photography of Earth. Caption by William L. Stefanov, NASA-JSC.

The Nile River and its delta looks like a brilliant, long-stemmed flower in this astronaut photograph of the southeastern Mediterranean Sea at night.