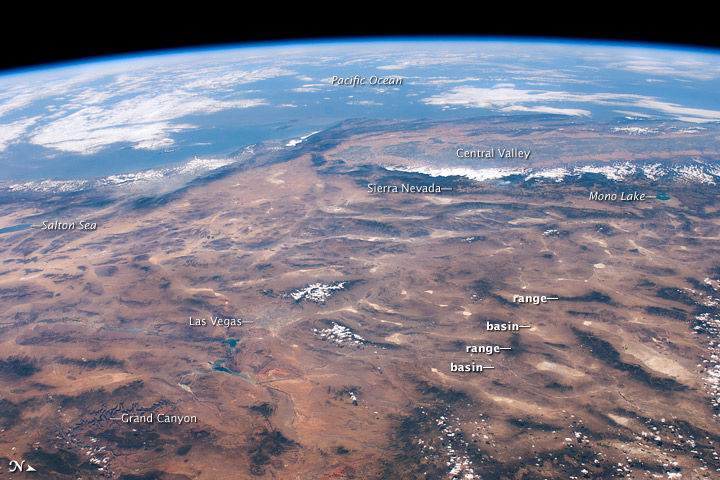 This panoramic view of the southwestern United States and Pacific Ocean was taken by an astronaut looking out at an angle from the International Space Station (ISS). While most unmanned satellites view the Earth from a nadir perspective—collecting data while looking “straight down”—astronauts onboard the ISS can acquire imagery at a wide range of viewing angles using handheld digital cameras.

The image includes parts of Arizona, Nevada, Utah, and California, as well the coastline of Baja California, Mexico (image center left). The Las Vegas metropolitan area appears as a gray region adjacent to the Spring Mountains and Sheep Range (both covered by white clouds). The Grand Canyon, located on the Colorado Plateau in Arizona, is visible to the east of Las Vegas, with the blue waters of Lake Mead in between.

The image also includes the Mojave Desert, stretching north from the Salton Sea to the Sierra Nevada mountain range. The Sierra Nevada is roughly 640 km long (north-south) and forms the boundary between the Central Valley of California and the adjacent Basin and Range physiographic province. The Basin and Range is so called because of the pattern of long linear valleys separated by parallel mountain ranges. The landscape was formed by extension and thinning of the Earth’s crust.

Astronaut photograph ISS024-E-14071 was acquired on September 9, 2010 with a Nikon D2Xs digital camera using a 32 mm lens, and is provided by the ISS Crew Earth Observations experiment and Image Science & Analysis Laboratory, Johnson Space Center. The image was taken by the Expedition 24 crew. The image has been cropped and enhanced to improve contrast. Lens artifacts have been removed. The International Space Station Program supports the laboratory as part of the ISS National Lab to help astronauts take pictures of Earth that will be of the greatest value to scientists and the public, and to make those images freely available on the Internet. Additional images taken by astronauts and cosmonauts can be viewed at the NASA/JSC Gateway to Astronaut Photography of Earth. Caption by William L. Stefanov, NASA-JSC.

This wide-angle panorama shows a huge swath of the western United States from Portland to Phoenix.