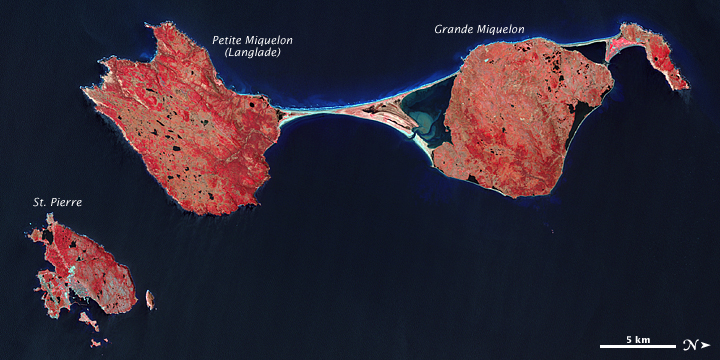 The last remnant of France’s once-vast holdings in North America, this island archipelago off the coast of Newfoundland bears the scars of a complicated geologic history. Saint Pierre and Miquelon cover just 242 square kilometers (93 square miles), and the three biggest islands lend the entire archipelago its name.

The Advanced Spaceborne Thermal Emission and Reflection Radiometer (ASTER) on NASA’s Terra satellite captured this image of Saint Pierre and Miquelon on May 23, 2009. In this false-color image, vegetation appears in varying shades of pink and red, bare land is beige, urbanized areas are blue-gray, and water appears in shades of blue and blue-green.

Saint Pierre is the smallest of the archipelago’s major islands, a mostly northeast-southwest running landmass with several smaller islands and islets scattered around it. In the west (top of the image), Miquelon consists of three main sections: an arc-shaped body in the north (top right), Grande Miquelon immediately southeast of that, and Langlade (or Petite Miquelon) Island in the south. Grande Miquelon and Langlade are connected by a tombolo, a ridge of beach material (typically sand), built by wave action, that connects an island to the mainland. This tombolo formed in the eighteenth century.

The terrain of the archipelago consists of mostly barren rock. Deforestation has claimed much of the vegetation, although woodland still covers 20 percent of the surface. Scrub vegetation and peatland are extensive. Cold, wet, foggy weather predominates, with windy springs and autumns.

The islands, particularly Langlade, bear a scoured appearance, and this is no coincidence. During the Pleistocene Ice Age, glacial ice scraped the island. Evidence of glacier movement lingers in the form of erratics and flour—fine-grained sediments ground off rocky surfaces by slow-moving ice—that overlie older rock layers. Under the erratics and glacial till, rocks date back to the Paleozoic Era, which ended roughly 250 million years ago.

Just as ice battered the land surface during the Pleistocene, wind and waves continue to erode these landmasses today. For several months a year, winds regularly exceed 60 kilometers (35 miles) per hour, and frequent storms pound the coastlines with high waves. In January 1987, a storm carved 5 meters (16 feet) off the some of the archipelago’s cliffs. Another storm in February 1988 brought winds of 160 kilometers (100 miles) per hour that took away another 14 meters (46 feet). Anecdotal evidence from local fishermen suggests that recent mild winters and less extensive sea ice might have allowed more erosion by ocean waves.

The last remnant of France’s once-vast holdings in North America, an island archipelago off the coast of Newfoundland bears the scars of a complicated geologic history. Altogether, the archipelago covers just 242 square kilometers (93 square miles), and the three biggest islands lend the entire island chain its name: Saint Pierre and Miquelon. 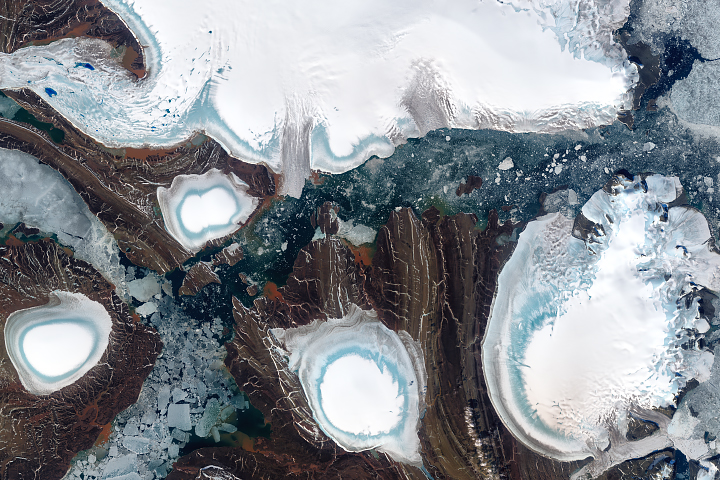 About half of this archipelago in the Russian high Arctic is covered in ice.