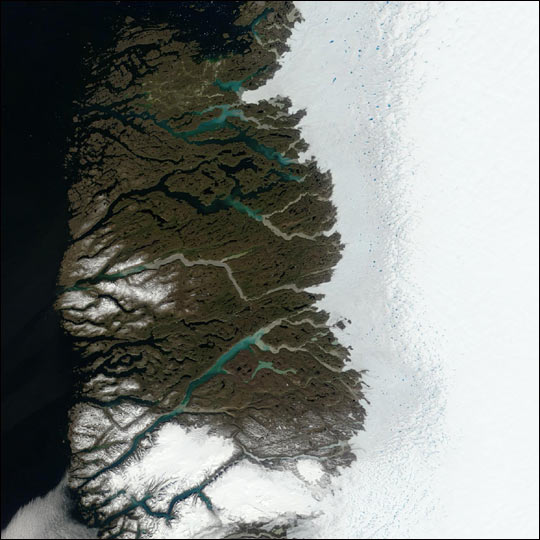 As this season’s white winter snow melts, the darker bare ice of Greenland’s permanent ice cap is being exposed. The contrast between the white snow and the gray-blue ice makes it possible to track melting snow on the ice sheet in satellite imagery, such as this image, captured by the Moderate Resolution Imaging Spectroradiometer (MODIS) on NASA’s Terra satellite on June 22, 2004. In similar images taken in mid-June of 2001, 2002, and 2003, more and more ice was exposed in each successive year. This year seems to have broken the trend. Though more of the gray ice is exposed this year than in 2002, the melt is far less significant than last year’s melt.

More of the ice sheet was exposed in 2003 largely because less snow fell in 2003. Dr. Konrad Steffen, principle scientist and an Associate Director of the Cooperative Institute for Research in Environmental Sciences at the University of Colorado, has spent every spring since 1990 at a camp on the Greenland ice sheet. “In early spring 2003, we had only 0.30 meters of snow at our camp at 1100 meters above sea level,” he says. The average is 1.6 meters of winter snow. The thin snow cover melted quickly—in just a few days—compared to the several weeks it typically takes for winter snow to melt.

In 2004, 1.2 meters of snow fell in Steffen’s camp, and heavy snow was still falling on June 10 when he left. This year’s deeper snow will take longer to melt than last year’s light dusting, not only because there is more of it to melt, but also because the new snow deflects energy back into the atmosphere, slowing the overall summer melt. This is clear in the above image where the new snow is brighter than the ice and exposed earth. Even if the snow melted at the same rate in 2004 as it did in 2003, enough of the bright, reflective snow remains to reflect solar energy back into space instead of allowing the heat to be absorbed. As less heat is absorbed over the same period of time this year compared to last year, the overall melt is slower.

There is evidence in this image that snow is melting along the southwest coast of Greenland, south of Qeqertarsuaq Island. In addition to the exposed ice sheet, bright blue pools of liquid water puddle near the snowline on the glacier. The image is available in multiple resolutions.