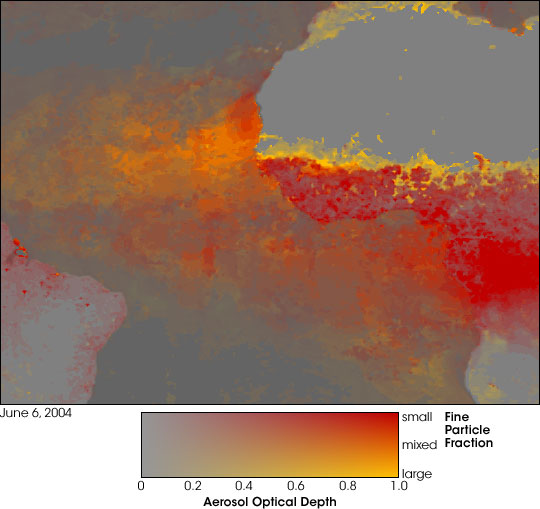 Numerous times between January and mid-June 2004 the skies over the Atlantic Ocean were filled with a river of particles flowing from Africa (right) to South America (left). Both particle pollution from smoke (red, indicating small particles) and dust (gold, indicating large particles) were regular trans-Atlantic travelers during the first half of the year. Light gray indicates areas of missing data over the Sahara and other deserts. This image shows the region on June 6, 2004.

Each day the Moderate Resolution Imaging Spectroradiometer (MODIS) sensors on NASA’s Terra and Aqua satellites collect observations on how greatly these different kinds of particles, which scientists call aerosols, affected the amount of sunlight that was able to pass through the atmosphere. Scientists translate the sensors’ observations into a scale they call “aerosol optical depth.” High values on the scale indicate lots of aerosol particles are interfering with light’s ability to pass through the atmosphere; low values indicate fewer aerosols. In these images, the highest values on the scale appear as the deepest shades of color, while lower values are more transparent.

The animation shows that a low level of aerosols is present over the Atlantic most of the time, and that these low levels are periodically amplified by more dramatic events. In the second week of February, a cloud of red springs up in western Africa as seasonal agricultural burning gets underway, and the aerosols mingle with dust blowing westward out of the southern margins of the Sahara Desert (large gray area in northern Africa). The mixed plume of smoke and dust spreads westward, and by February 15, it has reached South America. Other large events occur in the first two weeks of March, and in late May and early June, when the southern Africa agricultural burning season begins.

The transport of particles out over the ocean and to other continents has both benefits and drawbacks. Dust particles from the Sahara are rich in iron and other minerals that marine ecosystems depend on, but they can also carry bacteria and fungal organisms into environments such as Caribbean coral reefs that may not be prepared to fight off the diseases those organisms may cause.