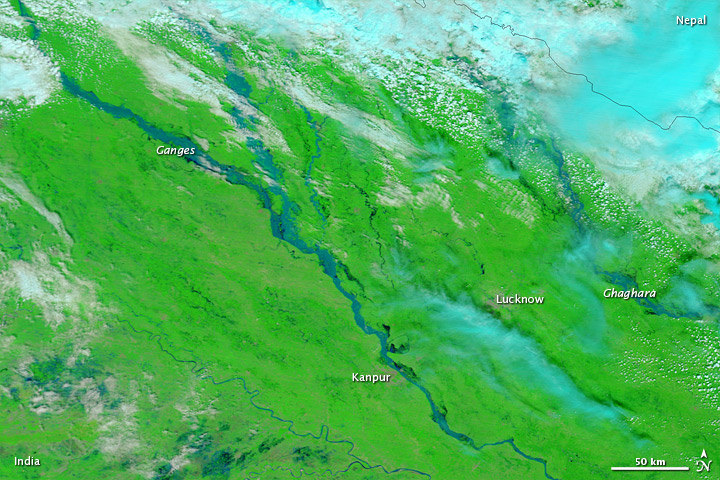 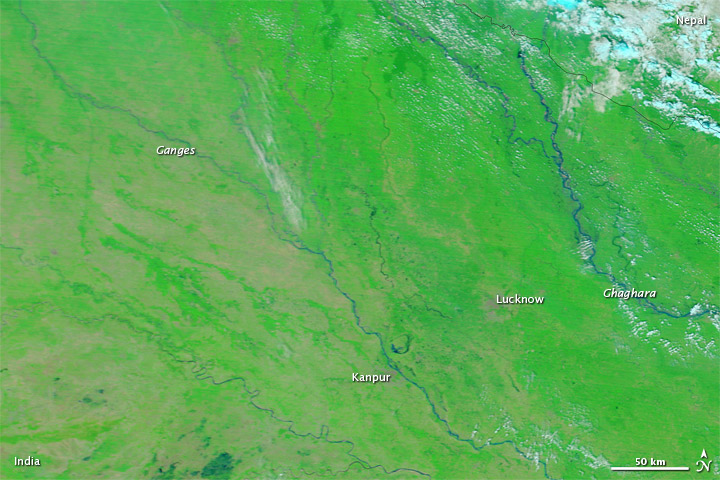 Heavy monsoon rains had pushed the Ganges and other rivers over their banks by late September 2010. The flooding left at least 2 million people homeless in northern India, Reuters reported. Some 500,000 hectares (1.25 million acres) of agricultural land were also flooded. Authorities reported that the Ganges and its tributaries had risen to near record levels, and meteorologists forecast more rains in the days ahead.

The Moderate Resolution Imaging Spectroradiometer (MODIS) on NASA’s Terra satellite captured these images of the Ganges and Ghaghara Rivers in northern India on September 22, 2010 (top), and September 21, 2009 (bottom). The images use a combination of infrared and visible light to increase the contrast between water and land. Water appears electric blue, vegetation appears green, clouds range in color from light blue-green to turquoise, and urban areas appear pink-beige.

The most obvious difference between 2009 and 2010 is the swollen Ganges River, which runs diagonally through the scene, past the city of Kanpur. In the image from 2009, this river is barely visible. East of the city of Lucknow, the Ghaghara is also swollen, although the difference in that river’s appearance between 2009 and 2010 is less dramatic. West-southwest of Kanpur, standing water has apparently accumulated on what was dry land a year earlier.