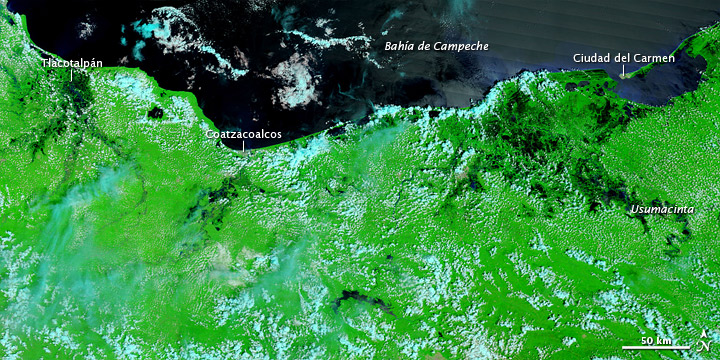 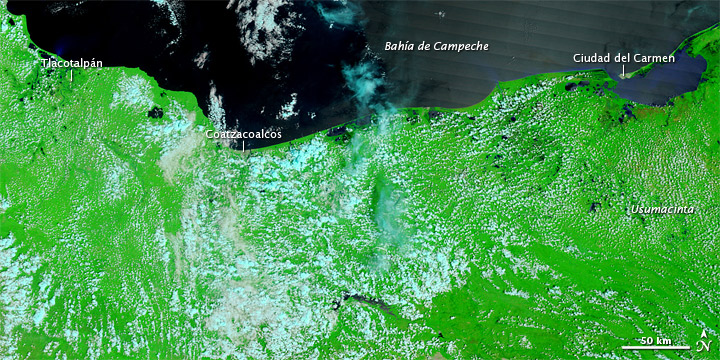 Flood conditions extended along Mexico’s southern Gulf Coast in late September 2010, affecting the states of Veracruz, Tabasco, and Campeche. Flood conditions were already severe along the coast earlier in the month, and the arrival of Hurricane Karl only added to the moisture. ReliefWeb reported that the August-September rainy season of 2010 was one of the region’s wettest on record.

The Moderate Resolution Imaging Spectroradiometer (MODIS) on NASA’s Terra satellite captured these images on September 20, 2010 (top), and just over a year earlier, on September 17, 2009 (bottom). Both images use a combination of infrared and visible light to increase the contrast between water and land. Water is navy blue, and vegetation is bright green. Clouds appear in varying shades of blue-green.

Wetlands occur in multiple locations along the coast, including the areas around Tlacotalpán, Coatzacoalcos, and the Usumacinta River. Each of these areas shows a dramatic increase in standing water in late September 2010.

On September 20, 2010, the Associated Press reported that several days of floods and mudslides had caused at least 16 deaths in southern Mexico. Two weeks earlier, the death toll from earlier floods in the region stood at 50.

Acquired on September 20, 2010, and September 17, 2009, these false-color images show the difference caused by weeks of flooding that struck southern Mexico in 2010.

Heavy rains filled dams to capacity and forced thousands from their homes in southern Mexico by early September 2010.

Floods on the Mexican Gulf Coast