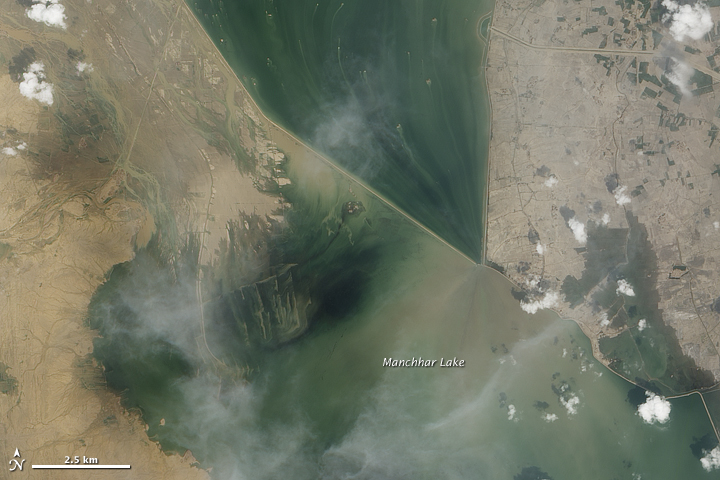 Manchhar Lake (also spelled Manchar) is Pakistan’s largest freshwater lake, and by early September 2010, it had pushed well beyond its normal boundaries after floodwaters drained into the lake. On September 10, 2010, the Advanced Land Imager (ALI) on NASA’s Earth Observing-1 (EO-1) satellite captured this natural-color image of the swollen lake’s northwestern margin.

North of the lake, two canals meet, forming an uneven V shape. North and south of this canal intersection, muddy waters linger on the landscape—an unusual condition for this area. The land around these canals is typically cultivated or settled. South of the canal intersection, floodwaters submerge not only agricultural fields, but also part of the canal that extends to the south.

On September 14, Dawn.com reported that Manchhar Lake had reached the town of Bajara, and was flowing toward nearby villages in Sehwan. Authorities had decided to discharge 1,000 cusecs (cubic feet per second) from Manchhar Lake into the Indus River, through a cut in the Aral Canal north of the town of Sehwan. Meanwhile, some 25,000 residents in the region were stranded by floodwaters as a shortage of vehicles hampered their evacuation efforts.

This astronaut photo of Israel’s Lake Tiberias (Sea of Galilee) shows an irregular patchwork of green and brown fields surrounding the lake. The Jordan River is visible flowing in at the northern end of the lake and out at the southern end.