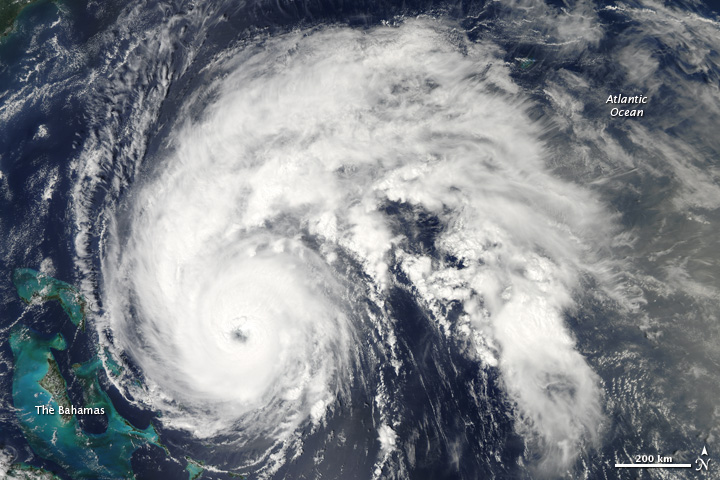 On September 1, 2010, Hurricane Earl moved ominously closer to a potential strike on the East Coast of the United States. According to the U.S. National Hurricane Center (NHC), the well-organized, category-3 hurricane packed winds of 125 miles (205 km) per hour. NHC forecasters were calling for Earl to approach the North Carolina coast late on September 2, perhaps intensifying to a category 4 storm on the way. Residents as far north as Cape Cod and Maine were advised to prepare for hurricane or tropical storm winds on September 3-4.

The Moderate Resolution Imaging Spectroradiometer (MODIS) on NASA’s Aqua satellite captured this natural-color image of Earl in the Atlantic Ocean at 2 p.m. Eastern Daylight Time (EDT) on September 1, 2010. The image shows a distinct eye circled by tightly wound bands of clouds. The Bahamas are immediately west of the storm, surrounded by aquamarine waters over coral reefs. The U.S. coastline is visible in the upper left corner.

The hurricane spans more than 180 miles (300 kilometers) from east to west in this image. Hurricane force winds extended as far as 90 miles (150 km) from the center, with tropical storm force winds stretching to 200 miles (325 km).

At 2 p.m. EDT on September 1, the NHC reported that Earl was centered near latitude 25.7 degrees North, longitude 72.7 degrees West, about 275 miles (440 kilometers) east of Abaco Island in the Bahamas and 680 miles (1095 kilometers) south of Cape Hatteras, North Carolina. The storm was moving northwest at 17 miles (28 km) per hour.

Hurricane Earl is a well-formed storm east of the Bahamas in this true-color image from September 1, 2010.