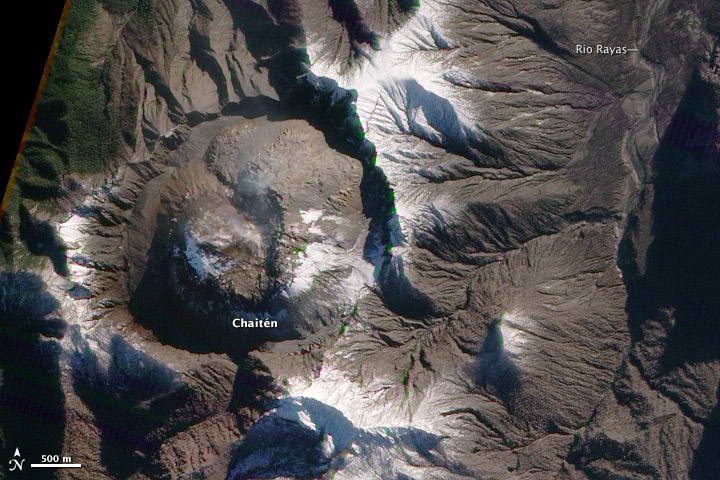 Although it’s hard to imagine snow on an erupting volcano, winter snows partially covered Chaitén Volcanoe’s lava dome on August 10, 2010. According to the Buenos Aires Volcanic Ash Advisory Center, Chaitén emitted an ash plume as recently as July 30, 2010. Chaitén has been erupting since May 2, 2008. Although activity has tailed off, the volcano is still sporadically releasing ash and frequently emitting steam and other volcanic gasses.

The Advanced Land Imager (ALI) aboard Earth Observing-1 (EO-1) acquired this natural-color satellite image on August 10, 2010. Bright white snow covers the high-elevation sections of the caldera rim, and some nearby ridges. The bare rock of the lava dome and dead vegetation (possibly coated with ash) are gray or brown. Healthy forest upwind (west) of the volcano remains green. A whispy haze, likely from volcanic emissions, covers the top of the dome.