Bay of Biscay in Bloom 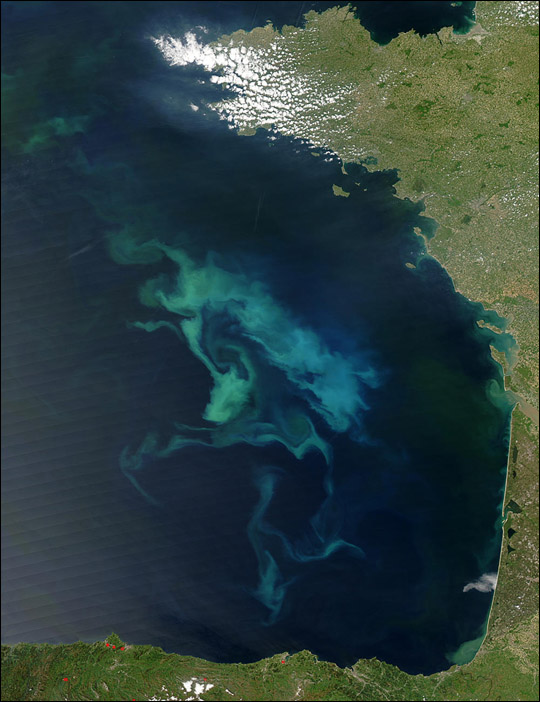 A large phytoplankton bloom in France's Bay of Biscay brought bright swirls of light blue and turquoise to the surface across much of the bay. Careful inspection of this true-color scene reveals there are likely a variety of species of phytoplankton blooming in the bay. Notice the dark green hues near shore along France's western coastline, likely due to the green pigment chlorophyll, which phytoplankton use for photosynthesis (just like their land-based cousins).

In contrast, the much brighter, light blue swirls suggest the presence of coccolithophores, a species of phytoplankton that produce a calcite (basically limestone) shell around themselves somewhat resembling a hubcap. While each individual coccolithophore shell is tiny--only about three one-thousandths of a millimeter in diameter--a large bloom such as this can contain trillions of the organisms, giving the ocean an almost milky appearance at the surface.

Coccolithophores are not hazardous to their environment, and it is not at all unusual to see such a bloom in the Bay of Biscay this time of year. In addition to the role these organisms play in the marine food chain, scientists are interested in tracking coccolithophore blooms as indicators of the physical state of the ocean and how the ocean may be changing in response to shifting weather patterns and longer-term climate change. Moreover, scientists are working to revise their estimates of the 'productivity' of these organisms on a global scale; i.e., how much carbon do they absorb during photosynthesis and how much calcite do they manufacture in their shells as a result? Currently, scientists estimate that coccolithophores produce more than 1.5 million tons (1.4 billion kilograms) of calcite per year, making them the ocean's leading producer.

This image was acquired on May 16, 2004, by the Moderate Resolution Imaging Spectroradiometer (MODIS), aboard NASA's Aqua satellite. In addition to the high-resolution image provided above, the image is available in other resolutions.