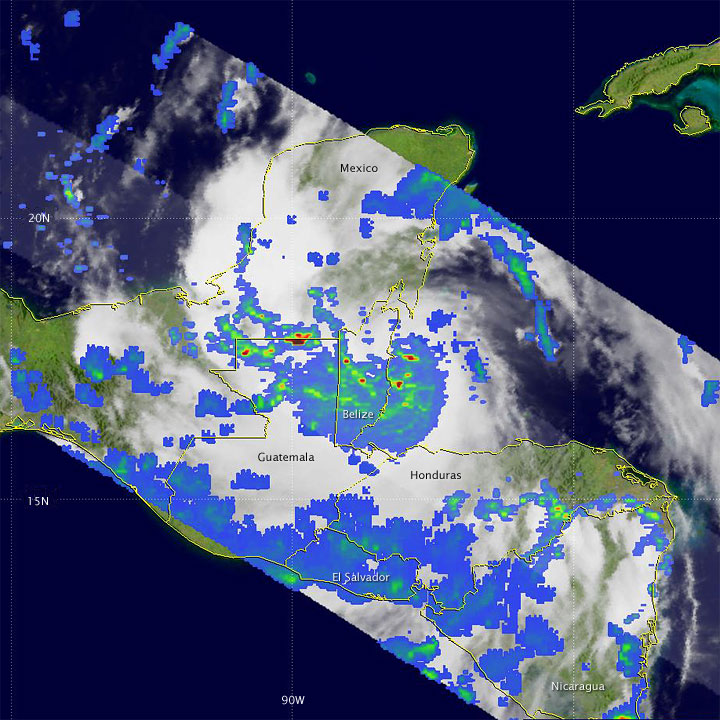 By June 27, 2010, floods and landslides caused by Alex had killed at least 10 people in Nicaragua, Guatemala, and El Salvador, according to the Agence France-Presse. Although Alex had weakened to a tropical depression, it was expected to re-strengthen over the Gulf of Mexico. By June 28, 2010, Alex was indeed intensifying.

This image shows Alex’s rainfall amounts, as observed by the Tropical Rainfall Measuring Mission (TRMM), on June 26, 2010. Color-coded precipitation amounts (red is the highest and blue is the lowest) are superimposed on a photo-like image. Areas of especially intense rainfall—50 millimeters, or almost 2 inches per hour—occur primarily along the borders of Mexico, Guatemala, and Belize. Lighter, although still substantial, rainfall amounts occur over the entire region.

On June 28, 2010, Alex’s growing strength prompted the U.S. National Hurricane Center to issue a hurricane watch for the Texas coast south of Baffin Bay to the mouth of the Rio Grande, and for the Mexico coast from the mouth of the Rio Grande to La Cruz. As of 10:00 a.m. Central Daylight Time on June 28, Alex was roughly 535 miles (860 kilometers) southeast of Brownsville, Texas, and had maximum sustained winds of 60 miles (95 kilometers) per hour.