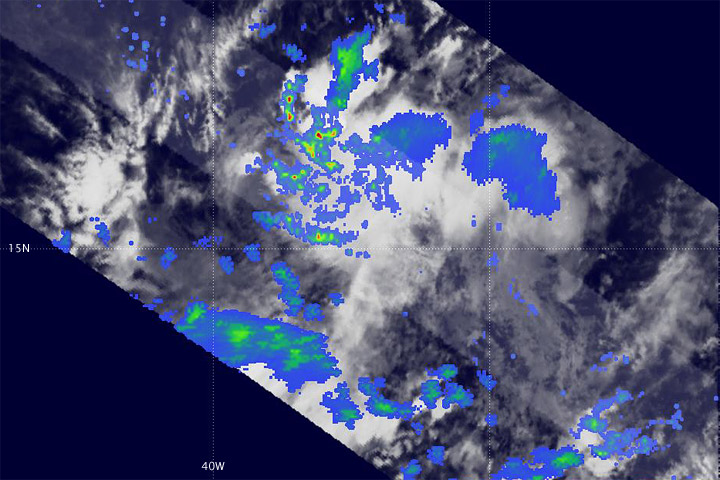 At 5:00 a.m. Eastern Daylight Time on August 3, 2010, the U.S. National Hurricane Center (NHC) reported that Tropical Depression Four had strengthened into Tropical Storm Colin, the third tropical storm of the 2010 Atlantic hurricane season. At that time, Colin was located roughly 945 miles (1,525 kilometers) east of the Lesser Antilles. As of 11:00 a.m. EDT on August 3, Colin had traveled westward, and was roughly 840 miles (1,355 kilometers) east-southeast of the Leeward Islands. Although the storm had traveled fairly rapidly, its wind speeds had remained largely the same, with maximum sustained winds of 40 miles (65 kilometers) per hour.

This image shows the storm’s rainfall amounts, as observed by the Tropical Rainfall Measuring Mission (TRMM), on August 2, 2010, the day before the weather system strengthened into Tropical Storm Colin. Color-coded precipitation amounts (red is the highest and blue is the lowest) are superimposed on a photo-like image. Small pockets of especially intense rainfall—50 millimeters, or almost 2 inches per hour—are scattered throughout a larger area of less intense rain—less than 10 millimeters (0.4 inches) per hour.