City Lights at Night along the France-Italy Border 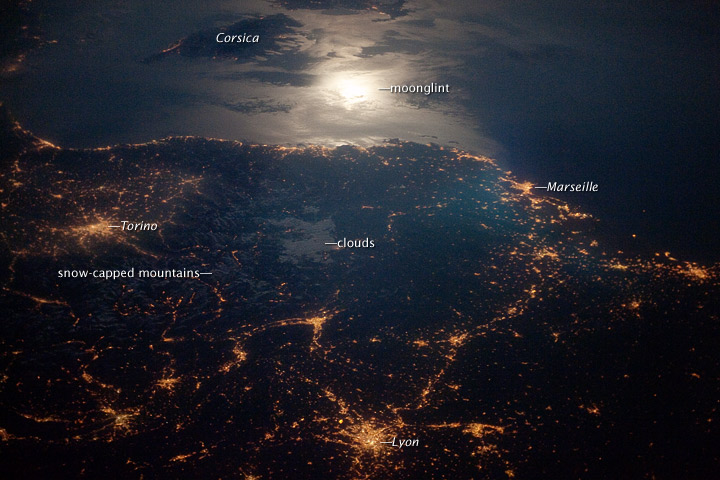 The brightly lit metropolitan areas of Torino (Italy), Lyon, and Marseille (both in France) stand out amidst numerous smaller urban areas in this dramatic astronaut photograph. The image captures the nighttime appearance of the France-Italy border. The southwestern end of the Alps Mountains separates the two countries. The island of Corsica is visible in the Ligurian Sea to the south (image top).

The full moon reflects brightly on the water surface and also illuminates the tops of low patchy clouds over the border (image center). This image was taken by an International Space Station (ISS) astronaut at approximately 11:55 p.m. local time, when the ISS was located over the France-Belgium border near Luxembourg.

Astronauts orbiting the Earth frequently collect images that include sunglint, or the mirror-like reflection of sunlight off a water surface. Sunglint typically lends a bright, or washed out appearance to the water surface. In clear-sky conditions, reflected light from the Moon can produce the same effect (moonglint), as illustrated in this astronaut photograph. The astronaut observer was looking towards the southeast at an oblique viewing angle at the time the image was taken; in other words, looking outwards from the ISS, not straight down towards the Earth.

Astronaut photograph ISS023-E-29061 was acquired on April 28, 2010, with a Nikon D3 digital camera, and is provided by the ISS Crew Earth Observations experiment and Image Science & Analysis Laboratory, Johnson Space Center. The image was taken by the Expedition 23 crew. The image in this article has been cropped and enhanced to improve contrast. Lens artifacts have been removed. The International Space Station Program supports the laboratory as part of the ISS National Lab to help astronauts take pictures of Earth that will be of the greatest value to scientists and the public, and to make those images freely available on the Internet. Additional images taken by astronauts and cosmonauts can be viewed at the NASA/JSC Gateway to Astronaut Photography of Earth. Caption by William L. Stefanov, NASA-JSC.

Moonglint and the lights of Torino, Lyon, and Marseille glitter in this nighttime astronaut photo of the Italy-France border region.