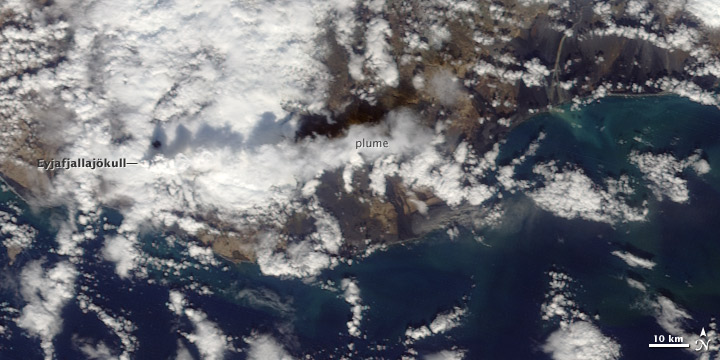 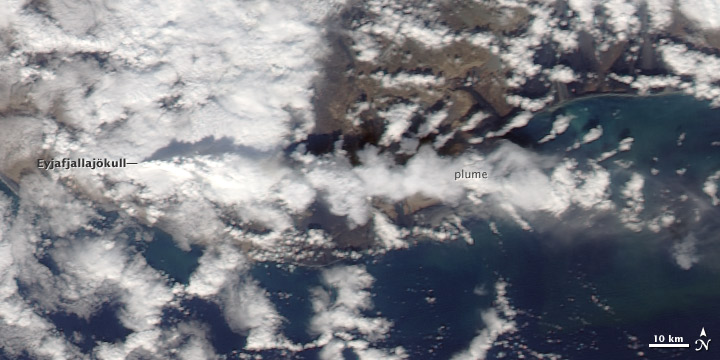 After two weeks of spectacular lava fountains and lava flows, the eruption in Iceland’s Fimmvörduháls Pass was winding down by April 12, 2010. Nearby, however, earthquakes underneath Eyjafjallajökull (an icecap-covered peak) suggested that magma was still moving in the same conduits that had brought lava to the surface at Fimmvörduháls. In the early morning hours of April 14th the Icelandic Civil Protection Department ordered evacuations of the towns and farms near Eyjafjallajökull due to a sudden increase in the amount of water in the area’s streams and rivers. Combined with rising water temperature, the increase in streamflow signaled the onset of a jökulhlaup: a flood caused by an eruption under a glacier.

Morning daylight revealed a spectacular steam plume over Eyjafjallajökull. These natural-color images were obtained by the Moderate Resolution Imaging Spectroradiometer (MODIS) instruments aboard NASA’s Terra and Aqua satellites. The top image was acquired shortly after noon, 12:30 p.m. local time. The white plume extends roughly 70 kilometers (40 miles) almost due east, rising above snow and clouds and casting a shadow to the north. The white color indicates the plume is primarily steam, unsurprising since 1,200° Celsius (2,200° Fahrenheit) lava reached the surface beneath a 200-meter (700-foot) thick glacier, which was quickly vaporized.

Current satellite imagery of Iceland is posted on the MODIS Rapidfire Site.

A 100-kilometer-long plume of steam and ash stretches from Iceland’s Eyjafjallajökull Volcano towards Europe.