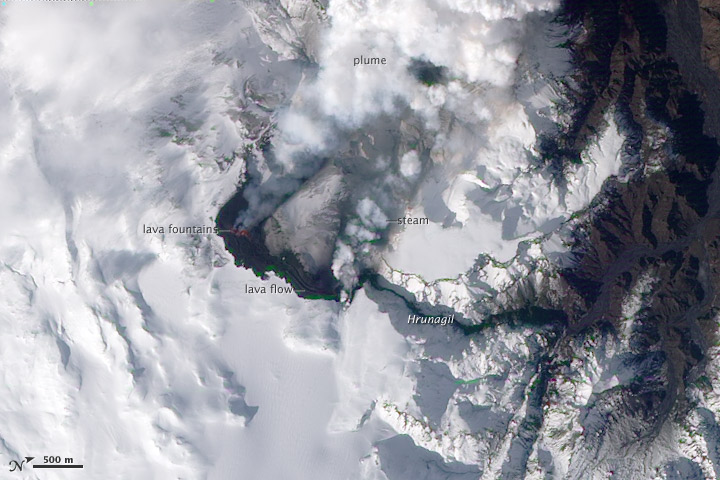 Iceland’s Eyjafjallajökull Volcano burst into life for the first time in 190 years on March 20, 2010. A 500-meter- (2,000-foot) long fissure opened in the Fimmvörduháls pass to the west of the ice-covered summit of Eyjafjallajökull. Lava fountains erupted fluid magma, which quickly built several hills of bubble-filled lava rocks (scoria) along the vent. A lava flow spread northeast, spilling into Hrunagil Gully.

This natural-color satellite image shows lava fountains, lava flows, a volcanic plume, and steam from vaporized snow. The image was acquired on March 24, 2010, by the Advanced Land Imager (ALI) aboard NASA’s Earth Observing-1 (EO-1) satellite. The lava fountains are orange-red, barely visible at the 10-meter (33-foot) resolution of the satellite. The scoria cones surrounding the fissure are black, as is the lava flow extending to the northeast. White volcanic gases escape from the vent and erupting lava, while a steam plume rises where the hot lava meets snow. (The bright green color along the edge of the lava flow is an artifact of the sensor.)

The eruption of Eyjafjallajökull was presaged by a series of earthquakes starting in early March. Over time, the earthquakes rose towards the surface, and land near the volcano rose at least 40 millimeters (2 inches)—both indications that magma was moving underneath the volcano. The eruption continued through at least March 26th, and may continue for several more months.

Previous eruptions in the area have caused flooding due to the melting of glacial ice (a Jökulhlaup), but the current eruption is in an area covered by winter snow, not permanent ice. Although some past eruptions of Eyjafjallajökull were followed by larger, explosive eruptions at nearby Katla Volcano, there is currently no sign of activity at Katla.