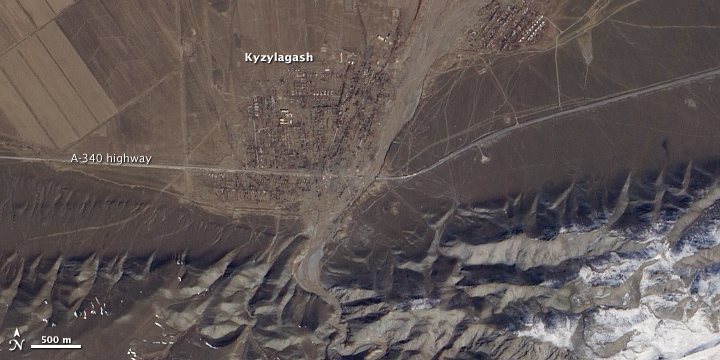 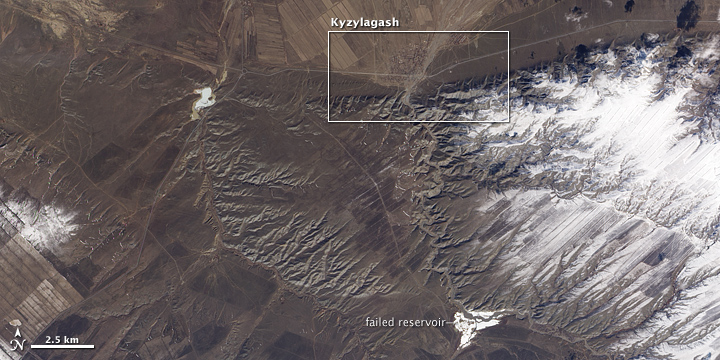 Rain, melting snow, and aging infrastructure all likely contributed to a disaster in Kazakhstan in March 2010. A dam south of the Kyzylagash settlement in Kazakhstan’s Almatinskaya Oblast’ (Almaty Province) sent sediment-laden water into the town. According to a local news report, one of two sluices in the dam south of town had not been working, leading to failure of the dam and inundation of the town. By March 16, the death toll from the event had reached 36 people.

The Advanced Land Imager (ALI) on NASA’s Earth Observing-1 (EO-1) satellite captured a true-color, high-resolution image of Kyzylagash and its surroundings on March 21, 2010. The top image is a close-up view of the town, and the bottom image shows the town and some of the terrain to the south.

The close-up view of Kyzylagash suggests that surging water destroyed a bridge on the A-340 highway. Along the highway, on either side of the waterway passing through town, two tiny strips of white cast shadows to the north. These are apparently what remain of a washed-away bridge. North of the highway, water appears to have fanned out in the eastern reaches of Kyzylagash, perhaps overflowing its banks.

The bottom image gives a wider view of the region, with the close-up area outlined in white. The wide-area image shows how the local topography likely contributed to the disaster. The water from the breached dam must have rushed down steep terrain as rugged mountains, partially covered with snow, push up against Kyzylagash. The town itself appears to occupy an alluvial fan where water spreads out over flat land. Agricultural fields appear on the outskirts of town. In the south, near the dam, the reservoir that has breached the dam appears as an uneven white shape.