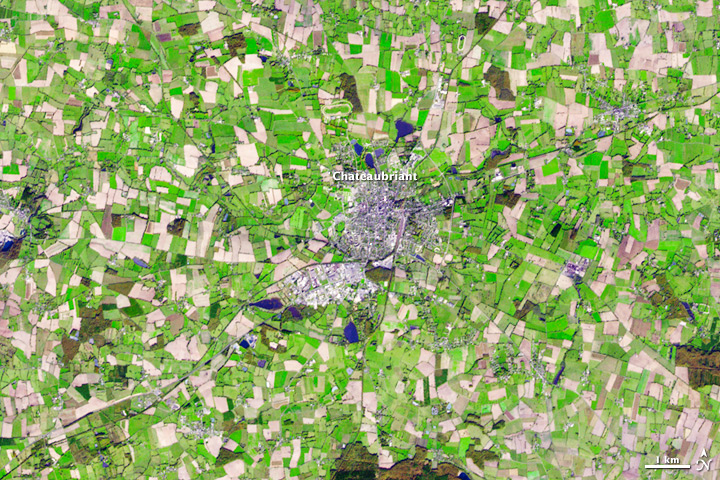 Vestiges of Medieval Brittany mingle with signs of modern civilization in this simulated natural color satellite image of Châteaubriant, France. The small city is silver, colored by light bouncing off the reflective surfaces of modern times. The surrounding country is an irregular patchwork of small fields, reflecting land use in the Middle Ages.

The Advanced Spaceborne Thermal Emission and Reflection Radiometer (ASTER) on NASA’s Terra satellite acquired the image on November 5, 2007. The image does not show what you would see if you were in an airplane over the city like a natural color satellite image would, but rather, it shows the region in a combination of visible and infrared light. Plant-covered land is still green and water is dark blue, so this particular combination is called simulated natural color.

By late November, crops had been harvested and many of the fields were bare. The exposed soil ranges from pale tan to brown in the image. Other fields (possibly pastures) remained green, even late in the year. Patches of forest on the right and lower edges of the image are brown and dark green.

The tiny city of Châteaubriant is in northwest France on the Chère and Rollard rivers. The town developed around a castle built in the 11th century as part of Brittany’s defensive line against France. The city now has a population of about 13,000.

Vestiges of Medieval Brittany mingle with signs of modern civilization in this simulated natural color satellite image of Chateaubriant, France.