Chaiten Volcano and the Surrounding Area 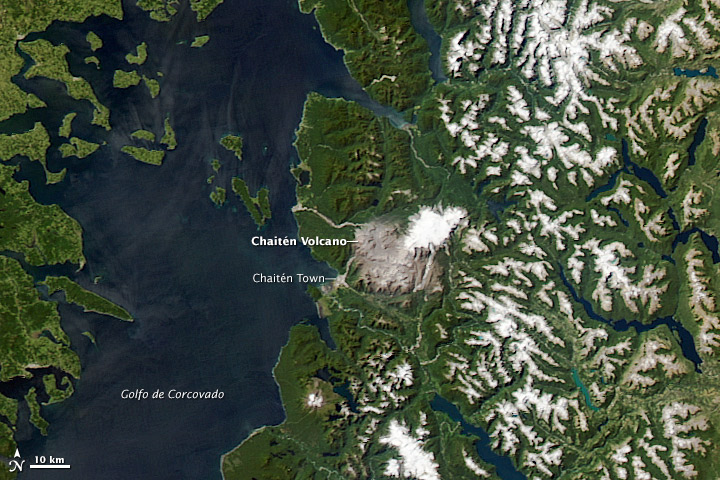 Although it has quieted in recent months, Chaitén Volcano remains active. Crystal clear skies reveal the volcano and the surrounding area in this natural-color satellite image, acquired on February 25, 2010. No plume is visible, but the thermal infrared signature of the volcano indicates that the lava dome is much hotter than the surrounding area.

Both the Rio Rayas O Blanco (to the west of Chaitén) and the Rio Blanco (to the south) are filled with gray material washed down from the volcano over the past several years. The lengthy eruption denuded vegetation to the east and covered the area with ash.

The Volcanism Blog summarized Chilean and Argentine newspaper stories reporting increased tourism in the area despite the partial destruction and official abandonment of the town of Chaitén. In response Chilean authorities issued a bulletin reiterating that the volcano remains at red alert, seismic activity and emissions continue, and the valleys adjacent to the volcano are still at risk from debris flows.

This image was acquired by the Moderate Resolution Imaging Spectroradiometer (MODIS) aboard NASA’s Aqua satellite.

Although it has quieted in recent months, Chaitén Volcano remains active. Crystal clear skies reveal the volcano and the surrounding area in this natural-color satellite image from February 25, 2010.

In January 2009, an explosive dome collapse occurred at Chaitén Volcano, and ash and steam eruptions were visible from space.