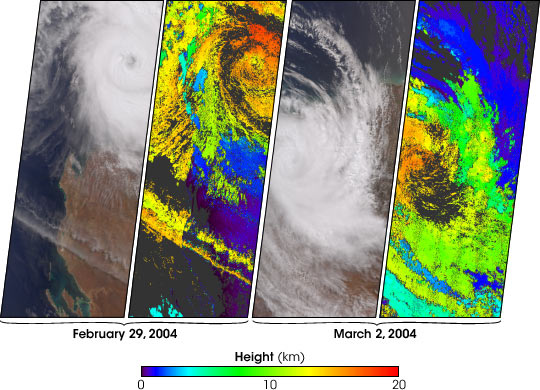 The Multi-angle Imaging SpectroRadiometer (MISR) acquired these natural color images and cloud top height measurements for Tropical cyclone Monty before and after the storm made landfall over the remote Pilbara region of Western Australia, on February 29 and March 2, 2004 (shown as the left and right-hand image sets, respectively). On February 29, Monty was upgraded to category 4 cyclone status. After traveling inland about 300 kilometers to the south, the cyclonic circulation had decayed considerably, although category 3 force winds were reported on the ground. Some parts of the drought-affected Pilbara region received more than 300 millimeters of rainfall, and serious and extensive flooding has occurred.

The Multi-angle Imaging SpectroRadiometer observes the daylit Earth continuously and every 9 days views the entire globe between 82 degrees north and 82 degrees south latitude. The MISR Browse Image Viewer provides access to low-resolution true-color versions of these images. These data products were generated from a portion of the imagery acquired during Terra orbits 22335 and 22364. The panels cover an area of about 380 kilometers x 985 kilometers, and utilize data from blocks 105 to 111 within World Reference System-2 paths 115 and 113. 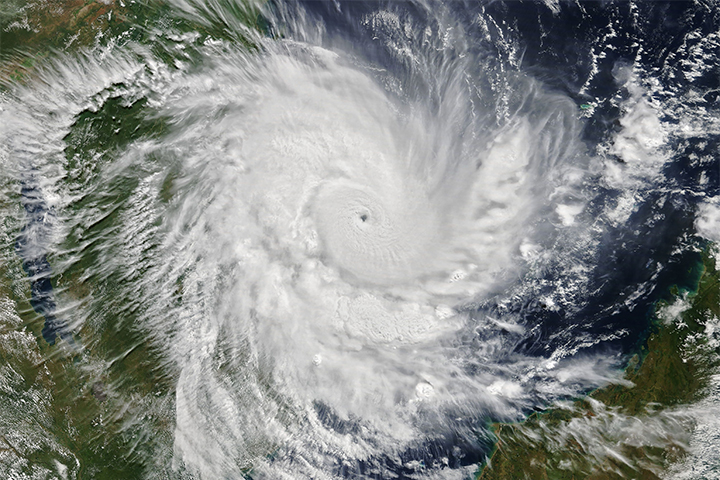