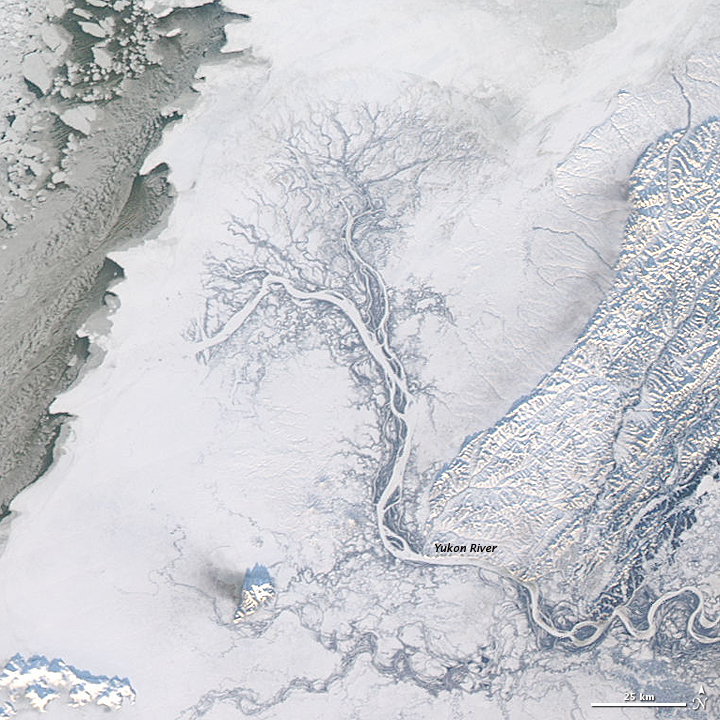 Nature works in patterns, and one of those patterns is imprinted on the frozen Alaskan landscape in this true-color image from January 11, 2010. Like a winter-bare tree, a network of roots, or the veins, arteries, and capillaries that enclose an organ, the Yukon River branches across the snowy Yukon Delta to the Bering Sea.

The main branches of the river are bright white, the surface frozen and probably covered in snow. The smaller distributaries (the branches that break away from the main branch of the river) are darker, highlighted against the field of white that covers the rest of the delta region. Each branch flows into the Bering Sea, but the coastline is invisible in this image. The shallower water near shore has frozen, and the white sea ice blends with the white, snow-covered coast. The continuous field of white heightens the delta’s resemblance to a tree viewed against a cloudy sky.

The Moderate Resolution Imaging Spectroradiometer (MODIS) on NASA’s Aqua satellite acquired this image on January 11, 2010. The highest resolution version of the image is provided above, but the image is also available in additional resolutions from the MODIS Rapid Response Team.

Resembling a winter-bare tree, the Yukon River branches across the frozen Alaska coastline in this photo-like image from January 11, 2010.

The clouds that normally shroud much of the Arctic cleared on January 12, 2011, to unveil a snow-bound Alaska.