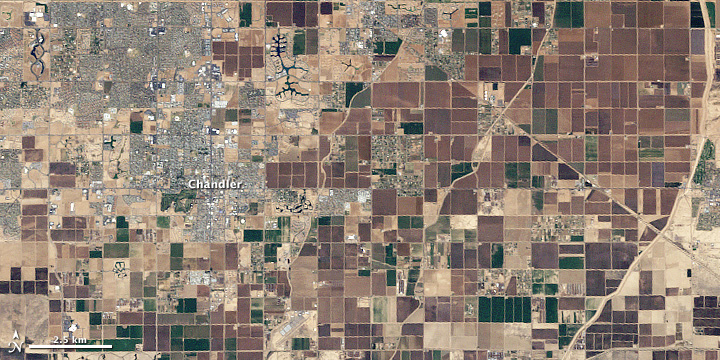 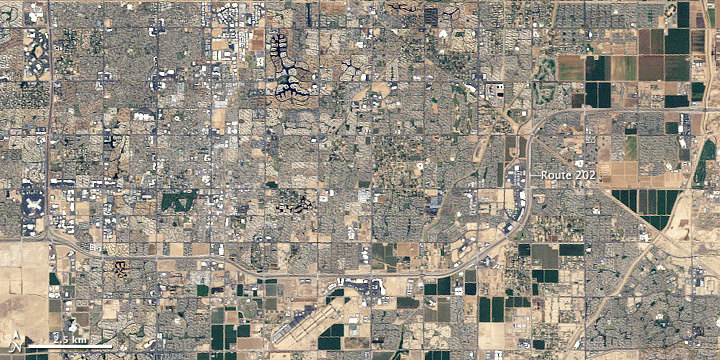 In the early twentieth century, when big American cities spawned satellite cities, those satellites were often downscaled mimics of the cities they surrounded. Like New York City, for example, its suburb Newark, New Jersey, had its own downtown. In the second half of the twentieth century, however, a different kind of satellite city emerged: a populous suburb with no central business core. “Boomburbs”—suburbs with populations of 100,000 or more that have maintained double-digit growth over decades—are primarily a phenomenon of the southern and western United States.

According to a study published in 2001, the U.S. city with the highest percentage of its population living in boomburbs was Phoenix, Arizona, where over 40 percent of the population lived in such satellite cities. Phoenix’s fastest-growing boomburb was Chandler, shown in these images from NASA’s Landsat 5 satellite on November 7, 1989 (top), and October 29, 2009 (bottom). On the southeastern outskirts of the Phoenix metropolitan area, Chandler grew from just 3,799 residents in 1950 to 176,581 residents in 2000, based on 10-year census figures. The differences between these images indicate that a significant portion of that growth happened after 1989.

Like much of the American Southwest, southern Arizona is arid, and agriculture depends on irrigation. As a result, cultivated fields—rectangles of green and brown—contrast with the pale tan of the naturally bare desert soil. In the 1989 image, most of the land east of Chandler is agricultural. Between 1989 and 2009, however, most of the fields give way to the blue-gray colors of buildings and pavement. In 2009, only a small number of agricultural fields remain, mostly east and south of Route 202. Because many of the United States’ boomburbs occur in the arid Southwest, planning for their water needs is particularly challenging for metropolitan and municipal governments.

(Although Chandler was the fastest-growing boomburb in Phoenix as of the 2001 study, it was not the largest. North of Chandler, Mesa (shown in the large image) had a population of almost 400,000 in the year 2000.)