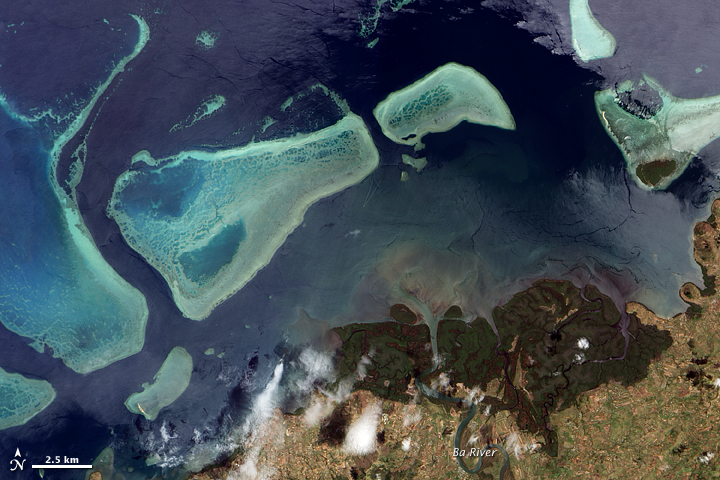 Deep green forest on land and the delicate turquoise coral reef in the ocean mirror each other in this true-color image from December 18, 2009. Both systems provide a significant habitat for a wide range of life, and both depend on the other for their healthy existence.

The forest, a mangove forest, defines the delta of the Ba River on the north side of Viti Levu, Fiji’s main island. Such mangrove forests serve as the interface between river and sea across Fiji and in many other places in the world. The trees grow with roots submerged in the semi-salty water near the shore, but they grow best in sheltered areas, where the ocean’s battering waves are minimal. In this case, the coral reef offshore provides a break, slowing incoming waves.

The mangrove forest, in turn, protects the reef from sediment and extensive algal blooms. The tangle of roots catches sediment and nitrogen from the river, acting as a natural filter. Sediment would cloud the water, blocking the sunlight that the coral needs to grow. Nitrogen from agricultural run-off feeds algae in the ocean. Extensive ocean blooms can coat the reef or rob the water of oxygen, both of which would be harmful to the reef. Nitrogen run-off could be a problem along the Ba River, since the river flows through heavily farmed hills and valleys where most of Fiji’s sugar cane is produced.

Deep green forest on land and the delicate turquoise coral reef in the ocean mirror each other in this true-color image of Viti Levu, Fiji, from December 18, 2009.

In late February 2007, NASA satellite images revealed that even the outer portions of the Australia’s Great Barrier Reef can be bathed in land-based pollution carried far offshore by plumes of river water. Conventional thinking was that river plumes affected only the lagoon and the inner portions of the reef. But images from the Moderate Resolution Imaging Spectroradiometer (MODIS) on NASA’s Terra satellite verify a new theory that not even the outer reefs are spared the impact of land-based pollution, which includes excess sediment, fertilizers, and pesticides.