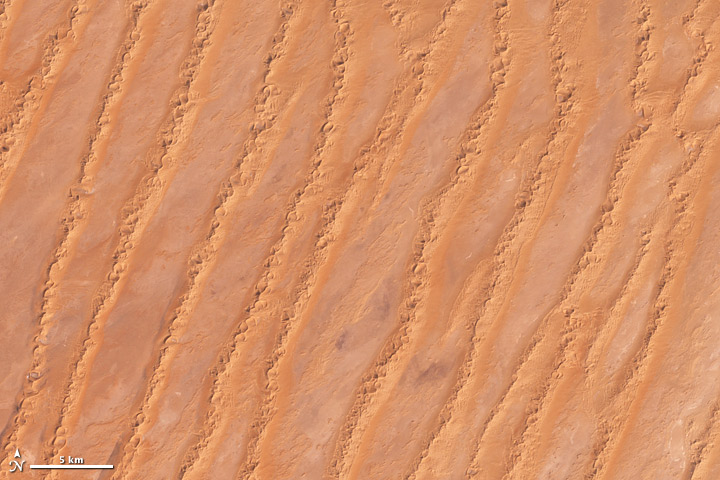 Vast, windswept plains of sand dunes (ergs), occasionally interrupted by rocky outcrops, stretch across much of Algeria in a giant C-shape. Except for exceedingly rare oases, these seas of sand are usually empty of life, including human civilization.

This natural-color image from the Landsat 7 satellite shows the emptiness of the Erg Iabès in western Algeria’s Adrar province. This rather small erg (compared to the country’s Grand Ergs) occupies the wide gap between the El Eglab Massif to the west and the Tademaït Plateau to the northeast.

Long, linear dunes such as the ones pictured here align in the direction of the prevailing winds, and they usually form under the influence of strong winds. However, linear dunes are not the only types of dunes that are found in ergs. For example, weaker winds blowing over a linear dune in the non-prevailing wind direction may create star dunes. Barchan dunes are shaped like a crescent, with a more gradual slope on the windward side, and a steeper slope on the downwind side.