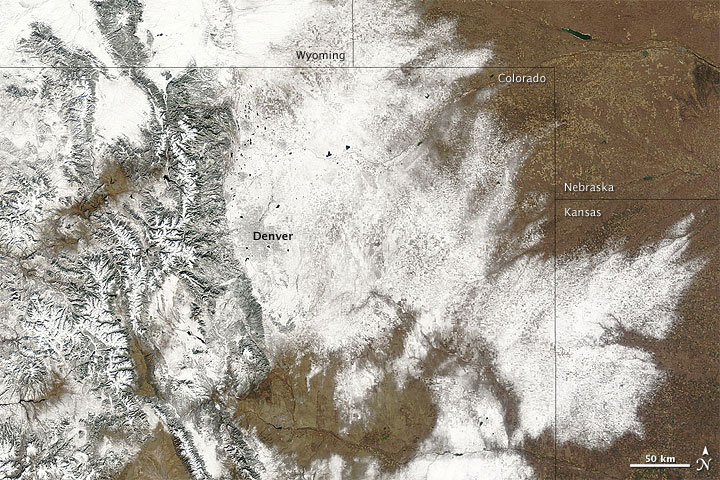 Not long after the snow from an October storm melted, the Denver area experienced another significant autumn snowstorm, on November 14–15, 2009. According to the National Weather Service, accumulation amounts in northeast and north-central Colorado ranged from 3 to 15 inches (8 to 38 centimeters). Hardly confined to the Denver area, snowfall occurred across the Rocky Mountains, well into the western part of the state. Snowfall also stretched into Wyoming, Nebraska, and Kansas.

The Moderate Resolution Imaging Spectroradiometer (MODIS) on NASA’s Terra satellite captured this true-color image on November 17, 2009. Snow blankets almost the entire northeastern quadrant of Colorado, interrupted by the urban gray of the Denver metropolitan area. The blanket of snow extends into the plains of southern Wyoming, southwestern Nebraska, and western Kansas.

Even heavier amounts of precipitation fell west of Denver, but the snow appears far less uniform in rugged foothills and mountains. West of the city, snowcaps create dendritic patterns over the Rocky Mountains, some of this snow was left by earlier storms.