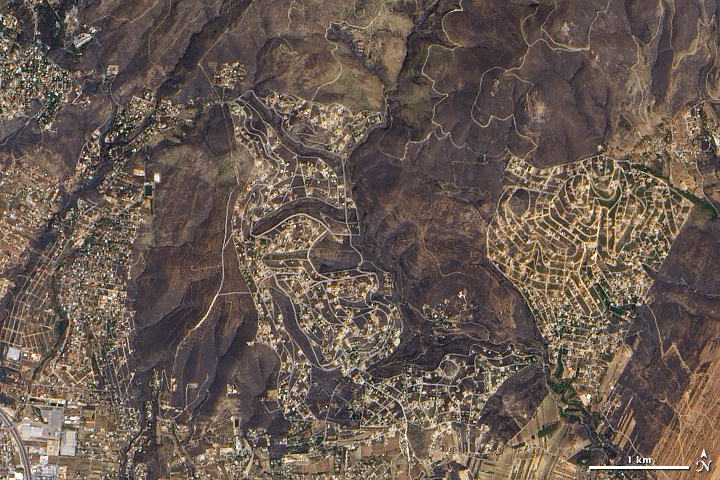 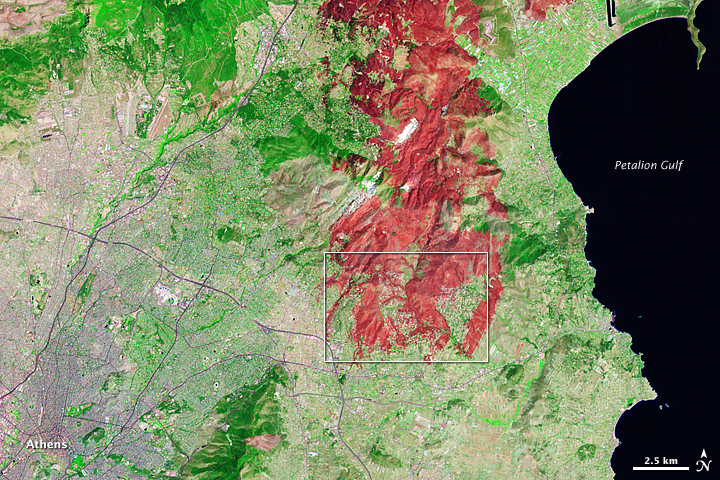 Charred plants color the hills northeast of Athens, Greece, chocolate brown in this photo-like image (top) from NASA’s EO-1 satellite August 27, 2009. The image was captured days after a large fire raced across the landscape. The fire destroyed 65 homes and 76 other buildings and damaged an additional 143 homes, reported the Wall Street Journal. The streets of the affected towns wind through the hills, white lines against a dark background that is punctuated by the bright white dots of buildings. The unburned land is, for the most part, tan or dull green in the late summer, though patches of deep green (irrigated vegetation) are also visible. The burned area encroaches on the developed areas, hinting at the damage the fire caused.

The extreme contrast between the red burned land and other types of land cover makes it easy to see where the fires burned. Over time, the burn scars will fade to a lighter shade of pink and then tan. A small old burn scar lingers in the hills immediately east of Athens. This image does not show the full extent of the August 2009 fire, but it does show the area immediately outside of Athens. The fire started on August 21 near the town of Grammatikos, 25 miles northeast of Athens (beyond the northern edge of the lower image), said the New York Times.

Charred plants color the hills northeast of Athens, Greece, chocolate brown in this photo-like image taken days after a large fire raced through the region.