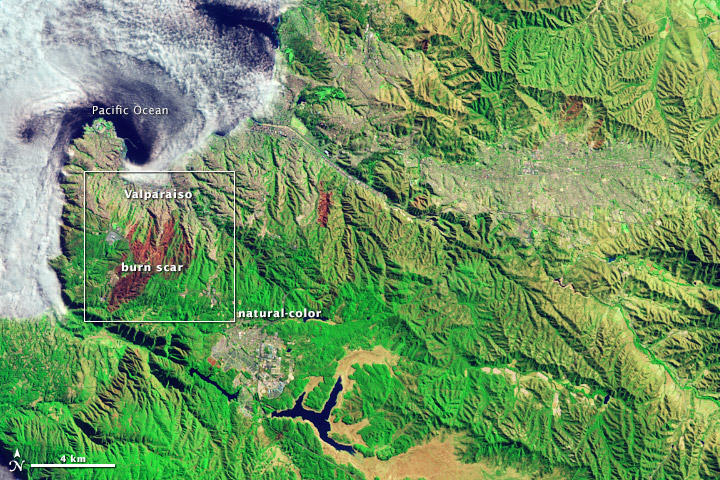 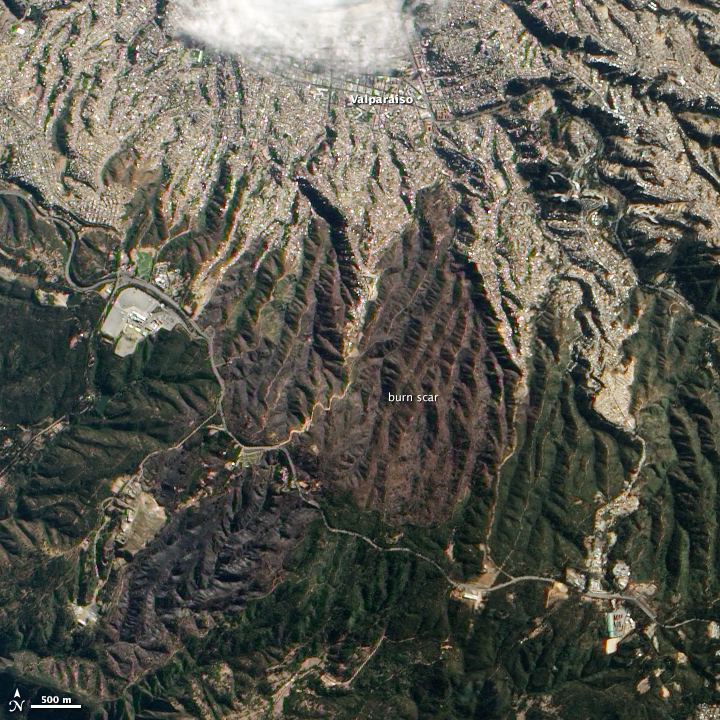 The city of Valparaiso rises from Chile’s Pacific coastal plain along steep mountains that surround the port like an amphitheater. The setting that makes it picturesque also put the city at risk in April 2014.

On the afternoon of April 12, a wildfire broke out in the hills south of the city and quickly moved into densely packed neighborhoods of wooden houses. Steep, narrow roads—or no roads at all—challenged firefighters trying to control the fire. By the time the fire was extinguished, 3,309 homes had been destroyed and 15 people had died. It was called the largest, most destructive fire in the city’s history.

On May 4, 2014, the Advanced Land Imager (ALI) on NASA’s Earth Observing-1 (EO-1) satellite acquired these images of the burned landscape. At the top is a false-color image that incorporates infrared light to make a clear distinction between newly burned land and the surrounding landscape. The fire scar is dark red; plant-covered land is bright green; sparsely vegetated land is tan; and the city is gray and purple. The fire burned 965 hectares (2,385 acres), extending down several hills and ravines toward the center of the city.

The lower image shows a more detailed, natural-color version of the scene. In this case, the newly burned land is dark brown and unburned vegetation is dark green. The city is white. A highway runs through the burn scar, and pale tan roads within the burned area hint at where homes once stood.

Satellite images such as these can help land managers assess both the extent and severity of the burns in a hard-to-reach landscape. This information can show where measures need to be taken to prevent further damage from landslides, erosion, falling trees, and water pollution.

A large wildfire burned homes on the edge of the Chilean city of Valparaiso.

Charred plants color the hills northeast of Athens, Greece, chocolate brown in this photo-like image taken days after a large fire raced through the region.

Thousands of wooden homes burned when strong winds blew a forest fire into the Chilean port city on April 12 and 13, 2014.