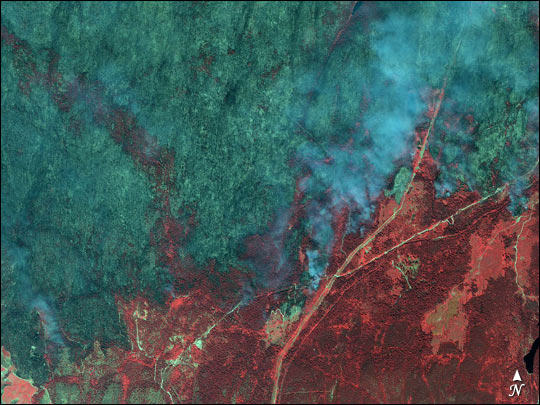 The Okanagan Mountain Park Fire rages through the Okanagan Valley in British Columbia, Canada, in this false-color infrared image captured by the IKONOS satellite on August 21, 2003. The burned region appears dark greenish grey in the upper portion of image. The dark red regions in the image are unburned forest and the lighter red patches are cleared land.

The northern reaches of this fire (just out of the image) destroyed or damaged 247 homes in and around the city of Kelowna as of August 26, 2003, and forced 16,000 people to flee. An additional 25,000 people were prepared to evacuate. The fire was discovered on August 16, 2003, and as of August 27, 2003, had burned more than 200 square kilometers of land. In the expanded version of the image, the city of Penticton on the southern tip of Lake Okanagan remains mostly untouched.

An astronaut on the Internatioanl Space Station captured this digital camera image of smoke from fires in British Colmubia trapped in the valleys of the northern Rocky Mountains on August 20, 2003.