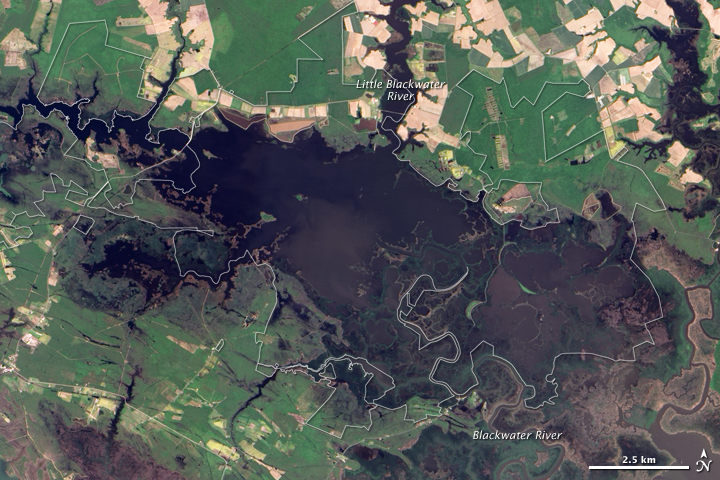 Along the eastern shore of the Chesapeake Bay in Maryland, about 20 kilometers (12 miles) south of the town of Cambridge, is the Blackwater National Wildlife Refuge. Covering over 27,000 acres (42 square kilometers), the refuge includes tidal marshes, freshwater ponds, and forests. Established in 1933 as a waterfowl refuge, the area is now recognized as a wetland of international importance by the United Nations’ Ramsar Convention. It hosts the East Coast’s largest breeding population of bald eagles north of Florida, and it is a crucial stopping point along the Atlantic Flyway, one of North America’s four major bird migration routes.

The Advanced Land Imager (ALI) on NASA’s Earth Observing-1 (EO-1) satellite captured this true-color image of the refuge on May 27, 2005. Much of the water in this preserve appears dark purple-brown, especially in the west and north. In the southeast, the water appears paler in color, likely due to a combination of exposed and submerged land. Sunglint—the mirror-like reflection of sunlight off the water’s surface—may also lighten the water’s appearance. Drier land, including farmland, varies in color from green to beige. A patchwork of fields occurs near the Little Blackwater River. A white outline delineates the complicated park boundary, which negotiates a maze of private lands outside the park.

The Blackwater River flows from the west, and the Little Blackwater River flows from the north to feed the lake. Both rivers flow through local swamps en route to the refuge. In addition to their crucial role in preserving habitat for migrating birds and other wildlife, the wetlands provide storm protection to lower Dorchester County, including the nearby town of Cambridge.