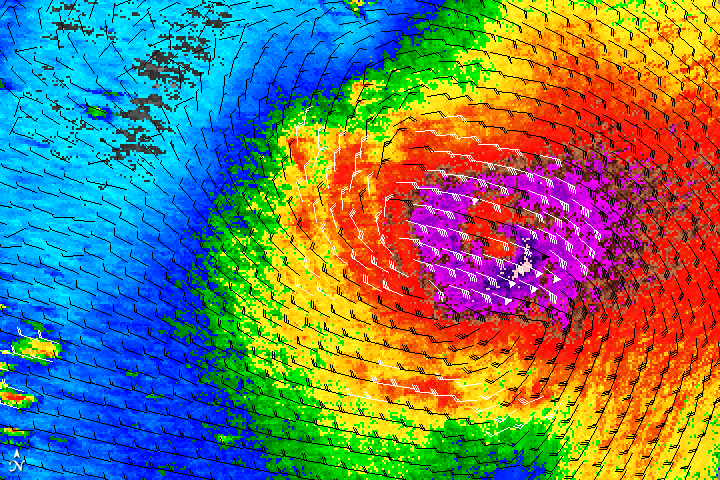 A weakening Cyclone Vamco was headed northeast toward Alaska’s Aleutian Islands on August 25, 2009. This image of the Vamco’s winds was captured by NASA’s QuikSCAT satellite on August 24. The purple area in Vamco’s center indicates strongest winds. Wind direction is indicated by small barbs. White barbs highlight areas where wind was accompanied by heavy rain.

Quikscat measures wind speeds over the ocean by sending pulses of microwave energy through the atmosphere to the ocean and measuring the echo—the energy that bounces back from the wind-roughened surface. The intensity of the microwave echo changes depending on wind speed and direction, and scientists relate the radar echo to actual wind speed by correlating it with observations from ground stations and buoys.

Because the high wind speeds generated by cyclones are rare, scientists do not have corresponding ground information to know how to translate QuikSCAT data for wind speeds above 50 knots (about 93 km/hr or 58 mph). Also, the unusually heavy rain found in a cyclone distorts the microwave pulses, making a conversion to absolute wind speed difficult. Instead, QuikSCAT images provide a picture of the wind structure within the storm, which, among other things, can reveal whether a storm has developed a strong eye.

Typhoon Vamco built into a powerful storm as it tracked north across the Pacific in August 2009. By August 25, it was weakening as it headed northeast.