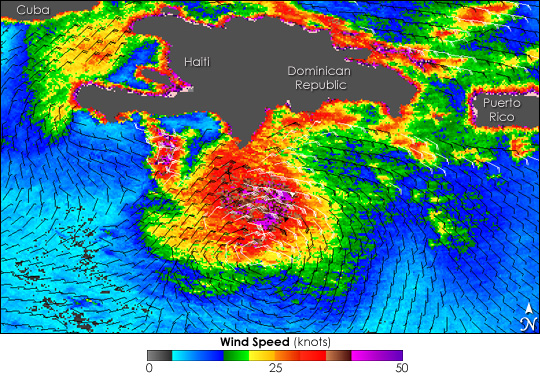 Churning over the warm waters of the Caribbean Sea, Gustav formed very quickly on August 25, 2008. Within 24 hours between August 25 and August 26, the storm went from tropical depression to a strong Category 1 hurricane, with sustained winds of 150 kilometers per hour (92 miles per hour or 80 knots). Gustav was poised to strike Haiti and the Dominican Republic on August 26, when the QuikSCAT satellite captured the data used to make this image.

The image shows wind speed and direction in the storm. The strongest winds, shown in purple, were located in the center of the storm. The calm air outside the storm system is represented in blue. The barbs illustrate wind direction, and white barbs show regions of heavy rain.