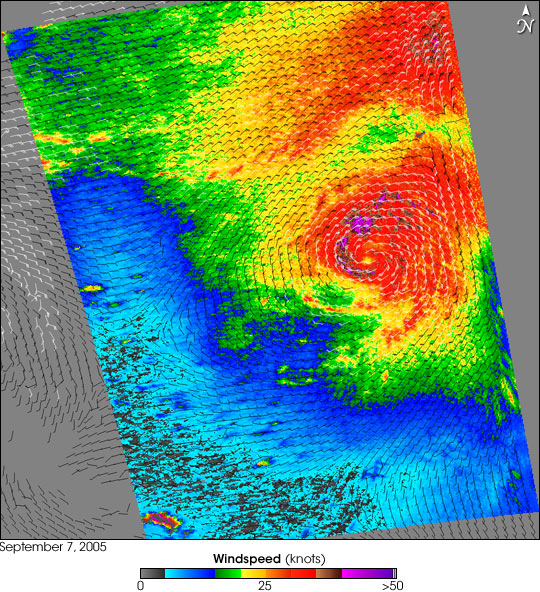 Hurricane Nate is shown here as observed by NASA’s QuikSCAT satellite on September 7, 2005, at 10:13 UTC (6:13 a.m. Eastern Daylight Time). At this time, the hurricane had sustained winds of 110 kilometers per hour (70 miles per hour; 60 knots). These winds did not make Nate strong enough to be classified as a hurricane, but the storm crossed the threshold to hurricane status only a few hours later.

Measurements of the wind strength of Hurricane Nate show sustained winds slightly higher than those shown by QuikSCAT observations. This is because the power of the storm makes accurate measurements difficult. The scatterometer sends pulses of microwave energy through the atmosphere to the ocean surface, and measures the energy that bounces back from the wind-roughened surface. The energy of the microwave pulses changes depending on wind speed and direction, giving scientists a way to monitor wind around the world.

Tropical Storm Nate has been slowly growing over the Atlantic Ocean southwest of Bermuda. It reached hurricane strength on September 7, 2005.