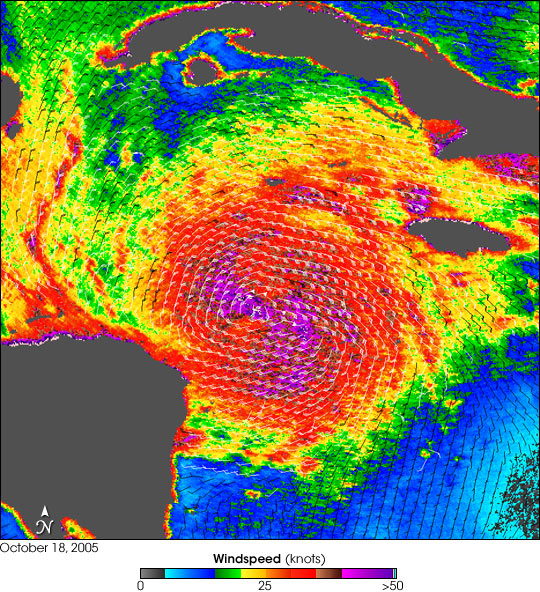 Hurricane Wilma is shown here as observed by NASA’s QuikSCAT satellite on October 18, 2005, at 23:31 UTC (7:31 p.m. Eastern Daylight Time). At that time, the hurricane had sustainted winds of 130 kilometers per hour (80 miles per hour; 70 knots). However, within twelve hours of this observation, Wilma increased power quite dramatically, running the full gamut of the hurricane strength scale to Category 5 with sustained winds of 280 km/hr (175 mph; 150 knots)! At that point, Wilma became the most powerful storm in terms of both wind speeds and air pressure ever measured in an Atlantic hurricane.

The image depicts wind speed in color and wind direction with small barbs. White barbs show areas of heavy rain. The highest wind speeds, shown in purple, surround the center of the storm.

Ground measurements of the wind strength of Hurricane Wilma show sustained winds somewhat higher than those shown by QuikSCAT observations. This is because the power of the storm makes accurate measurements difficult. The scatterometer sends pulses of microwave energy through the atmosphere to the ocean surface, and measures the energy that bounces back from the wind-roughened surface. The energy of the microwave pulses changes depending on wind speed and direction, giving scientists a way to monitor wind around the world.