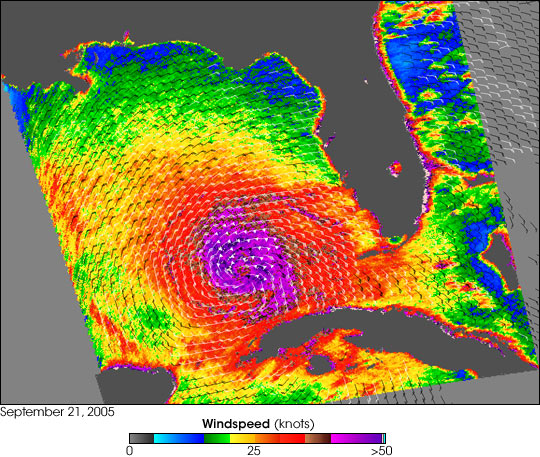 Hurricane Rita is shown here as observed by NASA’s QuikSCAT satellite on September 20, 2005, at 10:29 UTC (6:29 a.m. Eastern Daylight Time). At this time, the hurricane had 195-kilometer-per-hour (120 mile-per-hour; 105- knot) sustained winds. Within the next 24 hours, Rita would surge in power, packing winds near 280 km/hr (175 mph; 150 knots), reaching the very top of the hurricane-strength categories and becoming the fourth most powerful storm ever recorded.

Measurements of the wind strength of Hurricane Rita show sustained winds completely off the scale shown by QuikSCAT observations. This is because the power of the storm makes accurate measurements difficult. The scatterometer sends pulses of microwave energy through the atmosphere to the ocean surface, and measures the energy that bounces back from the wind-roughened surface. The energy of the microwave pulses changes depending on wind speed and direction, giving scientists a way to monitor wind around the world.