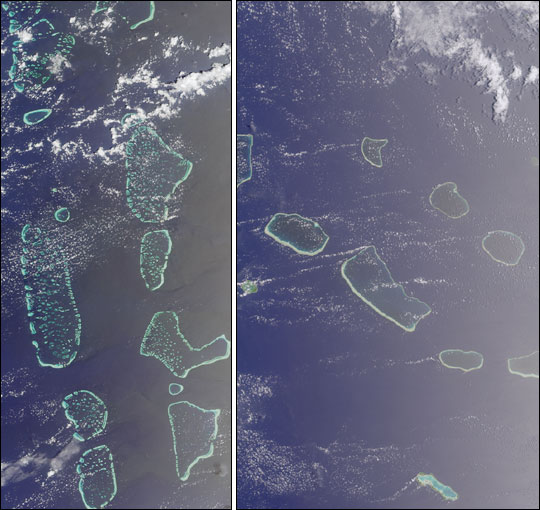 Use any reference materials you like to answer the following 4 questions.

1. Three of these four statements about the geomorphology of the coral reefs are true. Which one is false?
nbsp;   (A) Their modern shape has been influenced by sea level changes over geologic timescales.
nbsp;   (B) The reefs have grown over millions of years atop ancient volcanic mountain ranges.
nbsp;   (C) Unless there is too much sediment present in the water, some of the reefs can grow at depths of up to 170 meters.
nbsp;   (D) The reefs tend to grow in density and thickness where the water flow is greatest due to prevailing ocean currents.

2. Three of the following four statements accurately describes coral atoll ecosystems. Which one does not?
nbsp;   (A) Other living organisms besides coral help to build the atolls through calcium carbonate production.
nbsp;   (B) Symbiotic zooxanthellae provide reef corals with the calcium and nutrients they need to grow.
nbsp;   (C) Atolls can be very open, entirely closed, or have a number of entry points by which a lagoon area is open to the ocean.
nbsp;   (D) The diversity and abundance of corals is greater along the protected inner atoll and lagoon areas than along the outer reef slopes.

3. Three of these four statements about the atolls of the left-hand image are true. Which one is false?
nbsp;   (A) The many small saucer-shaped reef structures within the lagoonal areas make this reef system different from all others.
nbsp;   (B) The word "atoll" is a term that comes from a language native to this region, and has been expanded for use worldwide.
nbsp;   (C) The two largest cities in these atolls are home to about 8000 people each.
nbsp;   (D) At one atoll, construction of an artificial reef began in November 2001.

4. Three of these four statements about the atolls of the right-hand image are true. Which one is false?
nbsp;   (A) In this region the prevailing ocean current, or swell, comes from the south.
nbsp;   (B) The chemical character of the inner lagoons is not significantly influenced by the size of the openings in the reef rims.
nbsp;   (C) Within the image area there is a designated biosphere reserve and breeding grounds for at least 3 species of sea turtle.
nbsp;   (D) The most extensive freshwater is found at the small, round, green atoll that appears along the left-hand image edge.

E-mail your answers, name (initials are acceptable if you prefer), and your hometown by the quiz deadline of Tuesday, December 2, 2003, to suggestions@mail-misr.jpl.nasa.gov .

Answers will be published on the MISR web site . The names and home towns of respondents who answer all questions correctly by the deadline will also be published in the order responses were received. The first 3 people on this list who are not affiliated with NASA, JPL, or MISR and who have not previously won a prize will be sent a print of the image.

A new "Where on Earth...?" mystery appears as the MISR "latest featured image" approximately once every two months. New featured images are released on Wednesdays at noon Pacific time on the MISR home page.

These two images of the Tuamotu Archipelago, French Polynesia, illustrate diversity in the morphology of atolls, one of the major types of coral reef formations. A typical atoll structure is a lagoon surrounded by a closed rim of cays and shallow spillways that control the exchange of water between the ocean and the lagoon. However, like human beings, this general scheme may vary according to the history of each individual atoll, resulting in a high diversity of morphology, especially for small atolls. The two neighboring atolls shown here have some unique features. What was a lagoon on Nukutavake (19°17′ S 138°48′ W, 6.2 km²) is now dry and completely covered by vegetation. Pinaki (3.54 km²) has a drying shallow lagoon still connected to the ocean via a single narrow spillway. The variation of morphology implies that each atoll may have a different equilibrium between ocean, lagoon, and land ecosystems.

The only atoll in the South Atlantic Ocean is part of Brazil’s Fernando de Noronha archipelago.