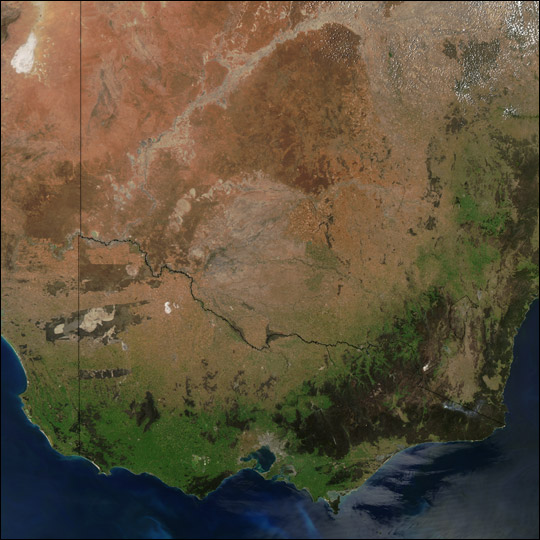 This MODIS scene of southeastern Australia reveals two keys to Australian agriculture: the pattern of greater rainfall to the south than north, and the effect of the Great Dividing Range on rainfall patterns.

To the north, image top, the land is very flat and dry. The vertical black line marks the border between the states of South Australia, New South Wales (NSW, north), and Victoria (south), with the NSW-Victoria border formed by the Murray River. Just shy of the point where the three states meet, the Darling River joins the Murray. The combined Murray-Darling drainage basin covers almost a third of Australia from far north into Queensland and south into central Victoria, making it one of the largest river drainage basins in the world. However, it drains largely arid land, so it is prone to cycles of drought and low water.

Southward, the land changes dramatically from the arid inland plains to lush bright green farmlands and deep green of the forested hillsides of the Great Divide. Australia is the flattest continent on Earth, with its tallest peak, Mt. Kosciuszko, being a mere 2,228 meters (7,310 feet) tall. Most of the mountains in Australia lie in a coastal Great Dividing Range. South and east of this range, rainfall is significantly higher than inland of it. It is no coincidence that two-thirds of the country’s population lives in this coastal area.

The north-to-south pattern is a result of a global atmospheric circulation pattern known as Hadley Cells. Along the equator, wind patterns come together and this creates areas with much more rainfall. Moist air is driven upward in strong updrafts in this region, forming rainclouds. Winds then carry the air north and south to roughly 30 degrees latitude, where it is pushed down. By then, the air has cooled and lost most of its water. In the area of Hadley Cell circulation downdrafts, air tends to be cooler and drier. Thus the Earth has a chain of deserts around the 30-degree north and south latitude lines. Throughout central Australia, the flatness of the land means there is little to redistribute this large-scale flow pattern, so the land gets very little rain. Southern Victoria sits far enough south to lie outside this arid zone. Furthermore, though the Great Dividing Range is quite small by most continental standards, it is sufficiently high to disturb the general Hadley pattern and wring more moisture from the atmosphere along Australia's eastern coastline.

In the center of Victoria on its southern coast lies the huge Port Phillip Bay with the cities of Melbourne to its north and east, and Geelong on its western extension. Melbourne has grown to be one of the largest cities in Australia due to a convergence of geographic effects. Its location in the coastal rainfall region gives it reliable rains relative to most of its surroundings. Its sheltered bay allows a large stable port facility. The city also has easy access to both the farmland around it and the lower passes through the Great Divide northward to the inner portions of the country, including important mining towns and cities along the Murray River.