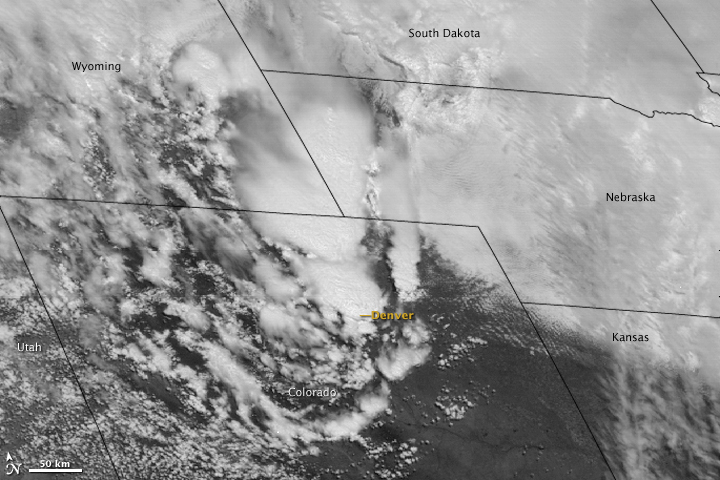 A violent spring storm brought funnel clouds and hail to the Denver metropolitan area on June 7, 2009. The National Weather Service reported five tornadoes between 1:15 p.m. and 3:00 p.m. local time (19:15 and 21:00 UTC). The funnel clouds occurred north, east, and southeast of Denver. One tornado touched down at least twice, causing significant damage to a local mall and residential area southeast of Denver, according to news reports. Residents also reported pea-, golf-, and baseball-sized hail in parts of the metropolitan area.

The Geostationary Operational Environmental Satellite (GOES) captured a series of images of the June 7 thunderstorm over northeastern Colorado. Part of that series, this black-and-white picture shows the storm activity at 1:45 p.m. local time. In northeastern Colorado, two cloud banks, one large and round in the west, and one thin and elongate in the east, appear to point toward Denver. These cloud banks are part of a much larger network of clouds extending across Nebraska and South Dakota. As the storm progressed, the clouds just north of Denver coalesced and traveled eastward over the Colorado plains.

One day after the storm, residents and insurers were tallying the property damage. Although the funnel cloud southeast of Denver might have caused the most significant damage, the harm done by large hailstones may have been more widespread. Some counties in Colorado’s eastern plains experience an average of six or more hailstorms a year, making them the most hail-prone counties in the United States, according to the Colorado Climate Center.