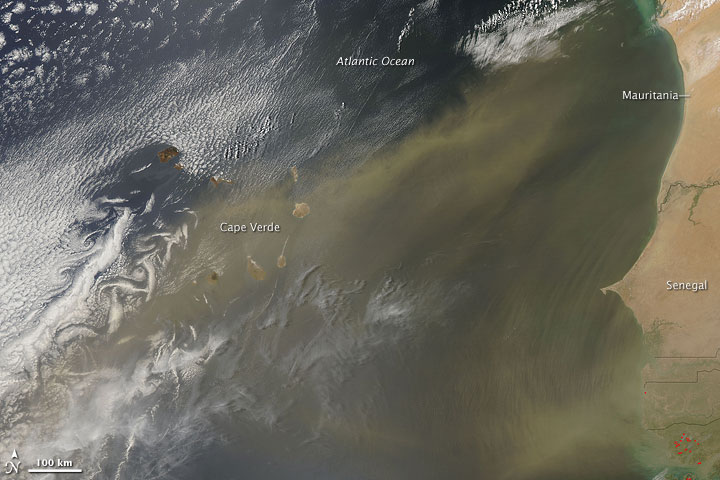 Dust plumes blew off the west coast of Africa and over Cape Verde on May 23, 2009. The Moderate Resolution Imaging Spectroradiometer (MODIS) on NASA’s Aqua satellite captured this image the same day.

Camel-colored plumes from the Sahara Desert blow toward the southwest, with the larger plume stretching across Cape Verde. Another plume blows off the coast of Senegal and neighboring countries to the south. Given the wide distance between these plumes, they may have originated from different sources, or wind directions may have shifted since the dust storm started.

In the west, dust mingles with clouds. Southwest of Cape Verde are Von Karman vortices—repeating swirls in the clouds caused by air currents encountering obstacles, in this case, the islands of the archipelago.

This true-color image shows dust plumes blowing off the west coast of Africa and over the Atlantic Ocean on May 23, 2009. One dust plume stretches across Cape Verde.

Acquired May 28, 2010, this natural-color image shows thick plumes of dust blowing off the west coast of Africa, past Cape Verde, and over the Atlantic Ocean.