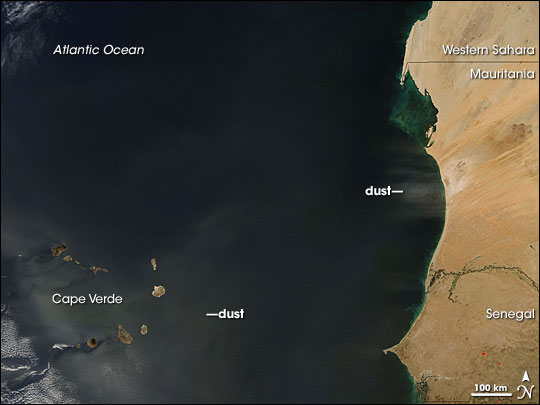 Dust plumes blew off the west coast of Africa while a dusty haze spread over Cape Verde on January 8, 2008. The Moderate Resolution Imaging Spectroradiometer (MODIS) on NASA’s Aqua satellite took this picture the same day. This image shows relatively small, distinct dust plumes blowing straight west off the coast of Mauritania. It also shows a large, amorphous plume lingering over Cape Verde. The dust hanging over this archipelago was likely blown in that direction earlier; MODIS detected dust storm activity off the coast on the previous day.

This natural-color image shows Saharan dust forming an S-shaped curve off the western coast of Africa, and passing directly over Cape Verde.