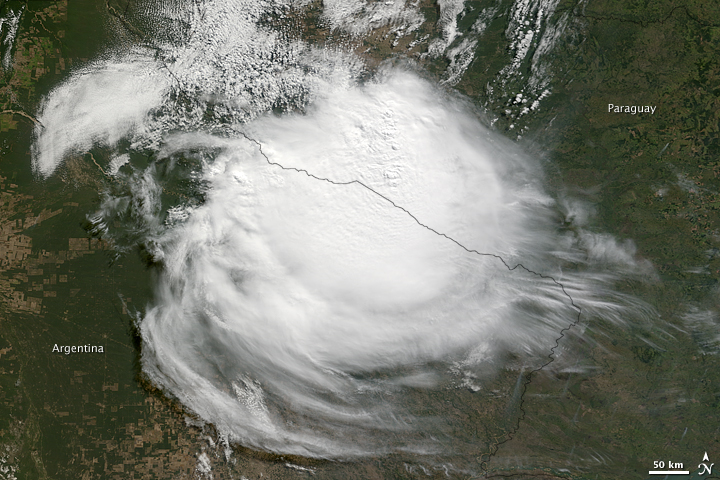 A low-pressure weather system over the heart of South America developed into an unusual cyclonic storm in mid-May 2009. According to MetSul meteorologist Luiz Fernando Nachtigall (who tipped The Earth Observatory with this story), the storm “remained quasi-stationary for 48 hours and was incredibly symmetric, resembling a tropical cyclone in the middle of the continent.”

This image from the Moderate Resolution Imaging Spectroradiometer (MODIS) on NASA’s Terra satellite shows the unusual storm on May 22. With clear skies all around, the ball of clouds hung over the border between Argentina and Paraguay. Near the top center of the storm, the clouds have a boiling appearance that is often associated with towering thunderstorms. Near the bottom of the storm, a few wispy streamers of clouds suggest the clockwise inward spiral of the storm.

Nachtigall wrote that “any kind of cyclonic formation is very rare in the Chaco region of northern Argentina and Paraguay. This system...unleashed heavy rain (over 200 mm) in Paraguay and displaced 500 people, according to local media reports.”

This image shows a rare cyclonic storm organized over Argentina and Paraguay on May 21, 2009.