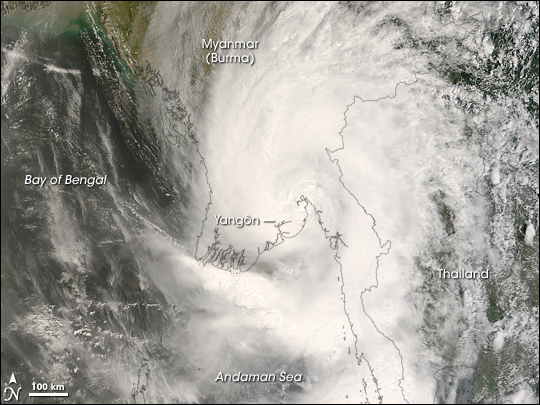 In early May 2008, Cyclone Nargis passed over Burma (Myanmar) after forming in the Bay of Bengal. At one point, Nargis was a Category 4 cyclone, with sustained winds of 210 kilometers per hour (130 miles per hour), according to Unisys Weather.

This satellite view of the storm was acquired by the Moderate Resolution Imaging Spectroradiometer (MODIS) on NASA’s Terra satellite. Ragged lines of thunderstorms peek up above the other clouds in a number of areas, casting shadows on lower lying clouds, evidence of intense rain systems within the storm. By the time MODIS acquired this image on May 3 at 10:55 am local time (4:25 UTC), the cyclone had weakened to tropical storm strength. While the spiral structure is still evident, the eye is poorly defined, and clouds fill the space the between spiral arms—characteristics of a less-powerful tropical storm.

The typhoon lost strength before coming ashore on May 2, but it still carried very powerful winds and heavy rain. The storm’s path took it almost directly over Yangôn, a city with a population of more than 4 million. Extensive flooding along the coastal plains where the storm passed was clearly seen in satellite imagery taken just after the storm passed. News reports on May 5 stated that at least 10,000 people were killed, and thousands more were missing.