Atlantis shows volcanic plumes from Kilauea rising up from three locations: Halema‘uma‘u Crater, Pu‘u ‘O‘o Crater, and from along the coastline where lava flows from the East Rift zone were entering the ocean."> 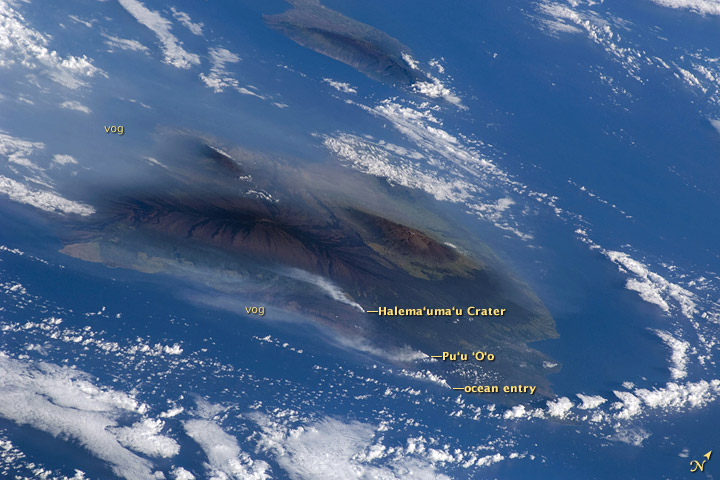 Kilauea Volcano, on the island of Hawaii, has been erupting continuously since 1983. This image, taken by the crew of Space Shuttle Atlantis (after completing the capture of the Hubble Space Telescope), shows volcanic plumes from Kilauea rising up from three locations: Halema‘uma‘u Crater, Pu‘u ‘O‘o Crater, and from along the coastline where lava flows from the East Rift zone were entering the ocean. The plumes have created a blanket of volcanic fog, called vog, that envelops the island.

The Hawaii Volcano Observatory maintains a website (including webcams) where staff continuously monitor and provide reports on the volcanic activity. Recent maps indicate expanded lava coverage along the coastal plain. In addition, Hawaii’s Department of Health maintains daily vog alerts and publishes advisories for vog conditions around the “big island” of Hawaii and the state. When this image was acquired, the region west of Hawaii Volcanoes National Park (downwind from the coastal plumes) had a vog advisory for people with respiratory sensitivities.

The Volcano Observatory also reported that “Lava from east rift zone vents continues to flow through tubes to the coast and is entering the ocean at two locations west of Kalapana. Sulfur dioxide emission rates from the Halema‘uma‘u and Pu‘u ‘O‘o vents remain elevated. Sulfur dioxide emission rates remain elevated and variable; the most recent rate measurement was 1,200 tonnes per day on May 12, compared to the 2003-2007 average rate of 140 tonnes per day. Small amounts of mostly ash-sized tephra continue to be produced consisting mostly of Pele’s hair, irregular pieces of vesicular glass, and a few hollow spherules.”

Astronaut photograph STS125-E-6569 was acquired on May 13, 2009, with a Nikon 2DXs digital camera fitted with a 200mm lens, and is provided by the ISS Crew Earth Observations experiment and Image Science & Analysis Laboratory, Johnson Space Center. The image was taken by the STS-125 crew. The image in this article has been cropped and enhanced to improve contrast. The International Space Station Program supports the laboratory to help astronauts take pictures of Earth that will be of the greatest value to scientists and the public, and to make those images freely available on the Internet. Additional images taken by astronauts and cosmonauts can be viewed at the NASA/JSC Gateway to Astronaut Photography of Earth. Caption by Cynthia Evans, NASA-JSC.

An oblique view (the astronaut was looking towards the southwest, rather than straight down) of the Hawaiian Islands taken from the International Space Station on a hazy spring day includes a regional view of three volcanic plumes from Kilauea that contributed to the vog: the plume from Halema’uma’u crater, from the Pu’u O’o vent along the east rift, and a plume from where lava enters the ocean on the coast.