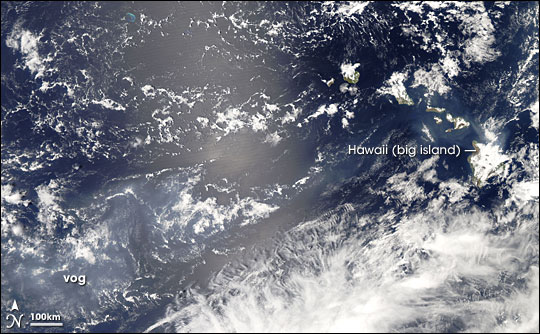 This image shows the Hawaiian Islands in the east, and the blue-white plume of vog resulting from the volcanic emissions in the west. Vog, or volcanic smog, results when volcanic pollutants, including sulfur dioxide, mix with oxygen and water vapor in the presence of sunlight. The vog shown in this image is consistent with reports from the U.S. Air Force Weather Agency (AFWA). The day before MODIS acquired this image, the AFWA issued a bulletin describing vog extending over the Pacific Ocean, both east and west of Hawaii’s big island.

In addition to vog, this image derives its pale hues from another phenomenon: sunglint. The wide, pale streak running vertically through the left half of image shows the Sun’s reflection on the ocean surface. So this picture not only shows the vog resulting from a volcanic emission, but also shows one factor that contributes to the vog’s formation (sunlight).