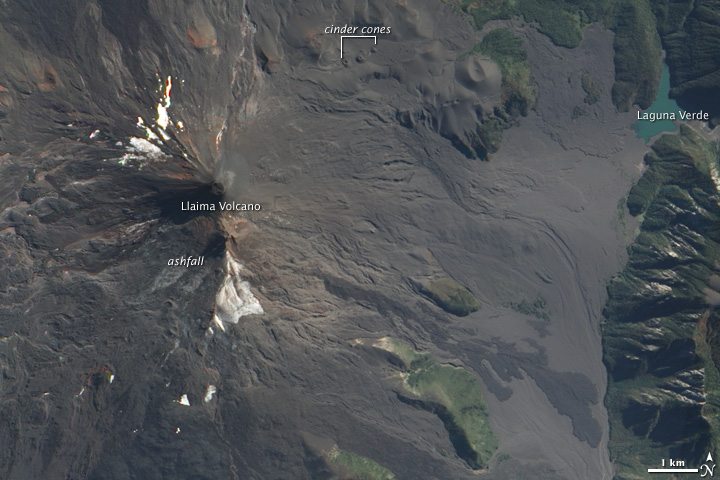 After months of low-level seismic activity, Llaima Volcano in Chile erupted in early April 2009. It quieted briefly on April 6, 2009, but resumed intermittent activity over the next several days. The activity included venting from the summit on April 14, 2009. When the Advanced Land Imager (ALI) on NASA’s Earth Observing-1 satellite passed overhead on April 16, 2009, however, the volcano was surprisingly subdued. Clear skies afforded the sensor an unobstructed view of lava-layered landscape around the volcano. Tree-covered hills and ridgelines rise up out of a sea of hardened, charcoal-colored lava flows. Isolated patches of snow brighten the slopes near the summit.

Llaima is one of Chile’s most active volcanoes. Two craters at Llaima have been active during historical times, one at the summit and another in the southeast. Since the seventeenth century, observers have recorded frequent eruptions from Llaima, mostly explosive eruptions with some lava flows. Llaima is also among the country’s most massive volcanoes: it reaches an altitude of 3,125 meters (10,253 feet), and it has a volume of about 400 cubic kilometers. Some of the 40 or more cinder cones that are scattered across the volcanoes flanks are noticeable to the northeast of the summit.