Fires along the South Carolina Coast 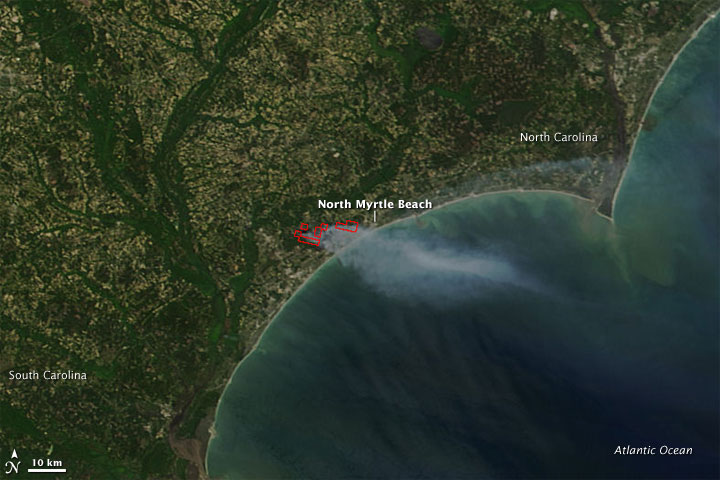 Wildfires burned along the South Carolina coastline on April 22-23, 2009, leaping over a highway and heading for a heavily populated area in North Myrtle Beach, according to The New York Times. By April 23, the fires had destroyed more than 40 homes and damaged another 100, and had forced more than 2,500 people to evacuate.

The Moderate Resolution Imaging Spectroradiometer (MODIS) on NASA’s Terra satellite captured this true-color image at 12:17 local time (16:17 UTC) on April 23, 2009. The red outlines in this image mark hotspots where MODIS detected unusually warm surface temperatures associated with the fires. The plume of pale gray smoke blows east-southeastward over the ocean. To the northeast of the fires is North Myrtle Beach, which lies just south of the border between North and South Carolina.

Wildfires typically destroy roughly 35 homes in any one year in South Carolina, a local official told the New York Times. Encouraged by low humidity and winds of 40 kilometers (25 miles) per hour, the April 2009 fire burned a record number of homes in just 24 hours. As of the morning of April 23, 2009, the fires were less than 10 percent contained.

This true-color image shows wildfires along the South Carolina coast (delineated by red outlines) and a smoke plume blowing toward the east-southeast.

Fires in the Southern U.S.