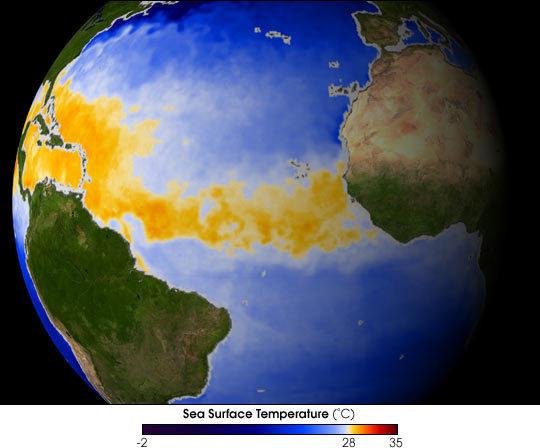 What makes a hurricane? First, warm water—at least 82ºF (28ºC). Several weeks after the Sun shines brightest on the tropics in late June in the Northern Hemisphere, the tropical ocean waters reach their warmest. In the image above, orange and red indicate where the ocean is 82ºF and warmer. This false-color map of sea surface temperature was made using data taken by the Advanced Microwave Scanning Radiometer-EOS (AMSR/E), aboard NASA’s Aqua satellite, and composited for the month of May 2003.

Next, add a disturbance, generally easterly waves off of Africa, comprised of winds resulting from the clash between the hot air from over the Sahara Desert and the cooler air over the Gulf of Guinea. These waves provide the initial energy and spin required for a hurricane to develop.

Every year, the tropical Atlantic becomes a meteorological mixing bowl with all the necessary ingredients for hurricane formation from June 1 to November 30. Typically, the peak of hurricane season occurs from late August to mid-September, which is usually when tropical cyclones of interest to U.S. coastal regions form around the Cape Verde Islands off Africa. NASA satellites are playing an increasing role in helping forecasters determine if all of the ingredients are coming together to create a hurricane. These satellite are also helping researchers track the storms over time and more accurately predict the paths they will take.