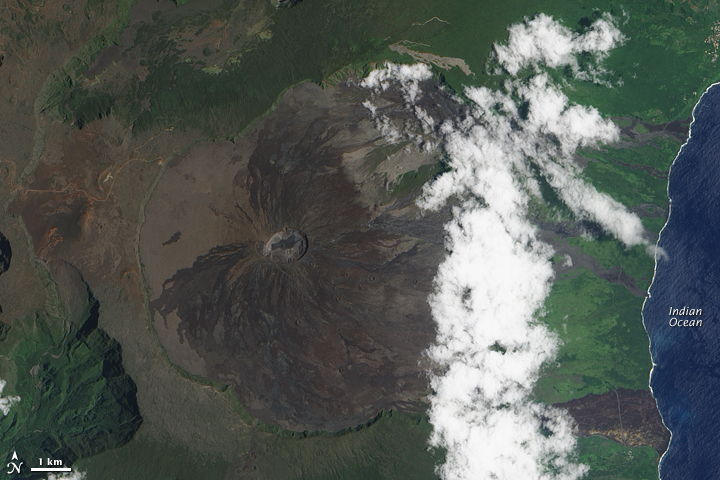 Considered one of the world’s most active volcanoes, Piton de la Fournaise occupies the east-southeastern end of Réunion Island in the western Indian Ocean. It is a shield volcano with a low, broad shape that resembles an ancient warrior shield. The volcano sports an 8-kilometer- (5-mile-) wide crater that slopes eastward to the coast. Within that crater sits a lava shield, Dolomieu, and most of Piton de la Fournaise’s historic eruptions have occurred from the summit or flanks of Dolomieu.

The Advanced Land Imager (ALI) on NASA’s Earth Observing-1 satellite captured this image of Piton de la Fournaise on January 16, 2009. Dolomieu is the circular feature at the center of the large crater. Lava flows from earlier eruptions have left their marks around Dolomieu, in the form of dark rivulets of rock that head mostly eastward toward the shore. On the west side of Dolomieu, few dark rivers of rock appear, as most lava flows have curved toward the north or south. Little vegetation thrives near Dolomieu, but farther away from the lava shield, vegetation appears bright green.