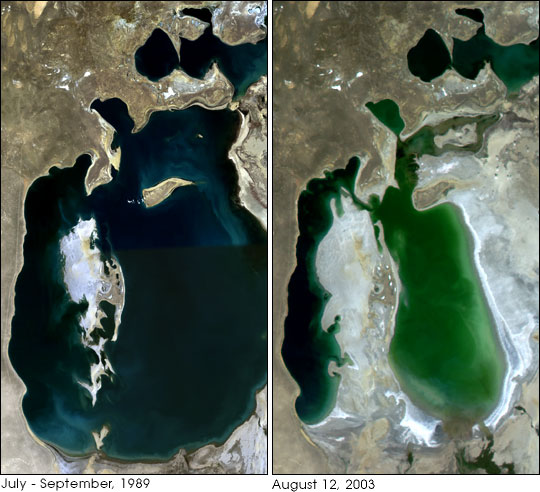 In July 2003, the Kazakhstan government, with funding from the World Bank, began a massive restoration project for the Aral Sea. Once the fourth largest lake on Earth, the Aral Sea has shrunk dramatically over the past few decades as the primary rivers that fed the Sea have been diverted and tapped nearly dry for cotton farming and other agriculture. The southern part of the Sea was fed by the Amurdar'ya and the northern part was fed by the Syrdar'ya, forming a large inland lake that moderated the region’s continental climate and supported a productive fishing industry.

The diversion process began in the 1960s, and by 1989, Landsat satellite imagery (left image) showed that the northern and southern half of the sea had already become virtually separated. The drying out of the Sea’s southern part exposed the salty seabed. Dust storms increased, spreading the salty soil right into the agricultural lands. As the agricultural land becomes contaminated by the salt, the farmers try to combat it by flushing the soil with huge volumes of water. What water makes its way back to the Sea is increasingly saline and polluted by pesticides and fertilizer.

The image at right was captured by the Moderate Resolution Imaging Spectroradiometer (MODIS) on the Aqua satellite on August 12, 2003, and it shows the rapid retreat of the Sea’s southern half, now separated into a western and eastern half, both of which may face the same bleak future. Recent hydrographic surveys have revised downward the lifespan of the dying lake; complete desiccation could happen in as few as 15 years.

The southern Aral Sea has been deemed beyond salvaging, and the restoration effort will instead focus on the much smaller, but less polluted and saline, northern sea (top right). The World Bank effort will construct a permanent dike (a temporary one made of sand has been in place since about 1995) between the two portions of the Sea, sealing the southern half’s fate. The northern Small Aral Sea will be allowed to refill from the inflow of the Syrdar'ya, and though it is never expected to regain its former extent, planners think that it will refill enough to support a robust fishing again. It should also help to stabilize the continental climate—increasing rainfall, smoothing out winter-summer temperature extremes, and suppressing dust storms.

The Landsat image is a combination of six scenes, downsampled to match the resolution of the MODIS image. The six scenes were collected by Landsat 4’s Thematic Mapper sensor in four passes: July 22, August 7 and 16, and September 7, 1989.