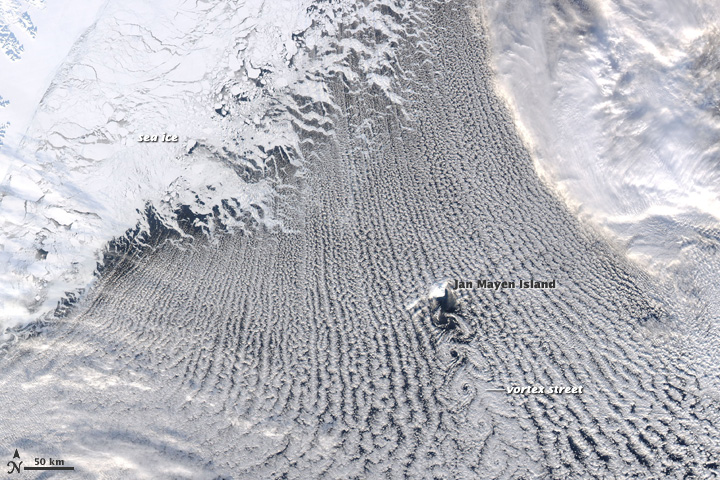 On February 24, 2009, cold northerly winds (perhaps katabatic winds from Greenland) encountered moist air over the Greenland Sea, and their meeting generated dozens of parallel rows of clouds, commonly called “cloud streets,” in the skies around the island of Jan Mayen.

The island added its own influence to the weather, creating an obstacle to the prevailing winds. Like water in a stream as it flows around a boulder, the wind diverged on the north side of the island and converged on the south side. Downwind of Jan Mayen, the air swirled into a string of spiraling eddies, known as von Karman vortices.

At upper left, a small piece of the snow-covered coastline of Greenland is visible, and a mosaic of sea ice hugs the shore. Close to the shoreline, the floes of ice are large, and their shapes are irregular. Farther from the coast, however (top center), the pieces of ice are so small they look like foam.

This image was captured by the Moderate Resolution Imaging Spectroradiometer (MODIS) on NASA’s Aqua satellite at 12:40 UTC (1:40 p.m. local time in Jan Mayen).

Cloud streets and von Karman vortices decorated the skies over the Greenland Sea on February 24, 2009.