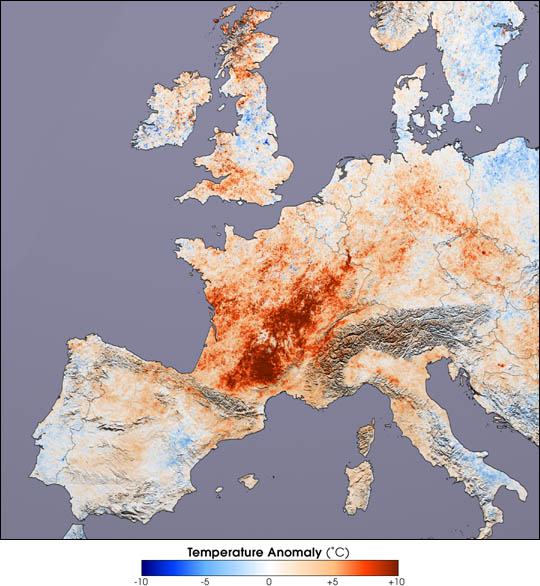 Even the Alps, which arc across southeastern France, Switzerland, Austria, and northern Italy (just below image center), were very warm. Glaciers were melting rapidly and swelling rivers and lakes to dangerously high levels. Climbers had to be evacuated from Switzerland’s famous Matterhorn after melting triggered the collapse of a rock face. The popular climbing destination was closed while geologists assessed the possibility of further collapses.

The heat wave stretched northward all the way to the United Kingdom, particularly southern England (bottom of island) and Scotland (top of island). In London, trains were shut down over fears that tracks would buckle in the heat, while in Scotland the high temperatures combined with falling water levels in rivers and streams threatened the spawning and survival of salmon. Throughout France, Spain, Portugal, and Italy, the intense heat and dry conditions sparked devastating forest fires that killed at least 15 people.

In July 2003, Europe experienced an historic heat wave that killed at least 3,000 people.